Lean times for turkey producers due to low prices

‘A huge amount of work goes into producing a turkey and it is absolutely ridiculous to see them for sale for as low as €8.99’ 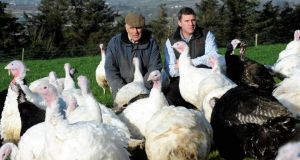 Robert Fitzsimons on his Cork farm with his son Robert jnr. He fears there is little for his son when it comes to making a living as a poultry farmer. Photograph: Dan Linehan

More than a million turkeys will be eaten in Ireland in the days ahead but while the birds remain an enduringly popular festive treat, many of those involved in producing and selling them are having anything but a happy Christmas.

Robbie Fitzsimons is a third generation turkey farmer in east Cork. He has serious doubts there will be a fourth generation Fitzsimons involved in his business despite the fact that he has an 11-year-old son who dreams of taking over his father’s farm one day.

“All my son wants to be is a poultry farmer like me but I don’t believe any of my children will be involved in the business,” he says. “I look at my son and can’t see how he will be able to make a living doing what I do. And that’s very sad to say.”

He says the blame for difficulties in the industry lies with retailers who have been driving down the price of turkey for years.

Consumers also share some responsibility, he says, as they increasingly believe all food – no matter how much it costs to produce – should always be available at rock bottom prices.

“I don’t think the public realise how food is produced any more and how much it costs to produce it. They also think that everything they see that is labelled ‘turkey’ is the same and that is a major problem,” he says.

“There is a major problem with turkey breast meat being imported into this country and then taken out of vacuum bags and without the consumer having any idea where is has originated and how old it is.”

For Fitzsimons, turkey season started over the August bank holiday weekend when all his day-old chicks arrived from the UK. They cost him about €8 each. To that price he has had to add the cost of feed, labour and housing the birds for around five months before they are sold.

Some cut-price supermarkets have started selling turkeys for as little as €9. But turkeys available at that price are small and frozen and they have almost certainly not been produced by Irish farmers.

Fitzsimons says these low prices create the impression in consumers’ minds that turkey is cheap to produce.

“But it really is not,” he stresses. “A quality turkey costs between €26 and €40 to produce, so even when a supermarkets is selling it for €25 and €30, they can only be breaking even. We cannot compete with those prices and are going to go out of business even though we are producing a great product that people want to eat.

“We might have a turkey that cost €40 to produce and so we need to sell it for €50 to make a margin but people see the low prices elsewhere and wonder what we are at. There are farmers who are going to die paupers even though they are producing great food.”

Fitzsimons is not the only one expressing concern as Christmas comes closer.

“We are not selling nearly as many turkeys as we used to and that’s because we have to compete with the prices in supermarkets that are just too low,” says Paddy Buckley of FX Buckley on Dublin’s Moore Street.

He pays turkey producers about €5 per kilo for his product, which means a 6.5kg bird costs him about €33. “I can’t sell that for €25 to match the supermarket prices. It is an absolute disgrace the price they are selling the turkeys for. A huge amount of work goes into producing a turkey and it is absolutely ridiculous to see them for sale for as low as €8.99.”

Despite their price, the very cheapest turkeys do not represent good value for money. The bone structure of a 6.5kg turkey and a 3.2kg turkey is roughly the same, so all the extra weight on the bigger bird is meat.

Buckley says turkey crowns are increasingly popular and he expects a “mad rush” between December 21st and Christmas Eve.

He says that in spite of the temptation of the cheaper fowl on supermarket shelves, many people are still willing to pay extra for a good fresh turkey.

“The trick is not to eat too much of it in the run-up to Christmas. If you buy a decent fresh turkey that has been looked after well, and wait until Christmas Day to have it, then you are going to absolutely love it,” he says.

But while the turkey remains popular, it is not entirely problem-free.

Earlier this month, Safefood published details of a survey which showed that in spite of warnings published each year, as many as 40 per cent of Irish people persist in washing their turkeys before cooking them, which can contribute to the spread of harmful bacteria.

Irish Water has pleaded with people not to pour turkey grease down the sink, warning that it can create all sorts of problems, not least the build-up of “fatbergs” which can cause huge blockages across the infrastructure in the days and weeks after Christmas Day.