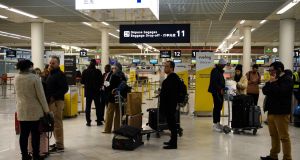 People wait to know if their plane is cancelled or on time during a strike over French government’s plan to overhaul the country’s retirement system, at the Paris Orly airport on Thursday. Photograph: Eric Feferberg/AFP

Air passengers travelling to and from France on Thursday are set to face serious disruptions as nationwide strikes kick off in response to pans to overhaul the French pension system.

Public transport networks across France are due to almost completely shut down as French rail workers, public sector staff, air-traffic controllers and teachers take to the streets on Thursday. In Paris, 11 out of the 16 metro lines have shut completely while at least 90 per cent of regional trains have been cancelled. About half of scheduled Eurostar trains between Paris and London have also been cancelled.

In Ireland, many passengers set to travel to France on Thursday are facing disruption as Aer Lingus and Ryanair announced flight cancellations throughout the day.

In a statement posted on Wednesday evening, Ryanair apologised for the cancellation of a number of flights as a result of the air-traffic controller strikes. The airline said all affected customers had been notified of cancellations by text or email and were entitled to a free change of flight or refund. It advised customers who had not received a message that their flight should operate as scheduled.

“We sincerely apologise for any inconvenience caused by the national strike,” read the statement. “We will do everything we can to minimise your disruption, which is sadly beyond our control.”

Aer Lingus flights EI524 from Dublin to Paris and EI525 from Paris to Dublin were also cancelled on Thursday as a result of the strikes with guests invited to re-book or request a refund.

A statement from the airline said it planned to operate “the majority of our French flights” but warned of flight delays and “possible short-notice cancellations” to flights to and from French airports as well as those flying in French airspace.

Further updates regarding Aer Lingus flights will be provided to guests via the website, text messages and social media, said the statement.

Both airlines advised passengers travelling on Thursday and into the weekend to keep an eye on their flight status online.

Easyjet and British Airways have also cancelled flights to and from France as a result of the strikes.

Meanwhile in Paris, workers’ unions are planning a large-scale protest march through the capital on Thursday with police warning of possible violence and damage and ordered all business, cafes and restaurants along the route to close. French authorities issued a ban on protests on the Champs-Elysees, around the presidential palace, parliament and the Notre Dame cathedral.

Police say they have deployed 6,000 police officers across Paris to help the city cope with the lack of transport and amid fears that yellow vest protest groups and extremist troublemakers could join the action.