Hobnobs, flights and tea: The no-deal Brexit effect on our favourite things

A hard Brexit would hit our beloved UK products, medicines, and online shopping 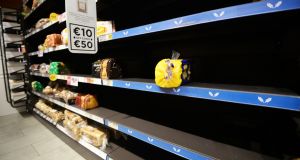 Bare shelves during the Beast from the East showed how reliant we are on food from the UK. Photograph: Cyril Byrne

Irish supermarkets are very vulnerable to changed circumstance. That has rarely been clearer than it was at the end of February last year when the few days of snow which came courtesy of the Beast from the East led to immediate and unprecedented disruption.

There were yawning gaps on Irish supermarket shelves as a chronic lack of resilience across the supply chain became impossible to ignore.

While the absence of bread was the focus of many people’s concern, dairy products, meat, fruit and vegetables and even many tinned and dried goods appeared to be in short supply during and immediately after the storm.

It also became clear that consumers are more reliant than they have ever been on big supermarkets which have taken over almost every element of the food supply chain.

And the supermarkets, for their part, are reliant on everything running as it should. They have very limited in-store space for fresh and chilled foods and have fine tuned their delivery systems to such an extent that only what they expect to sell on any given day is ever delivered to the shop.

But with a no-deal Brexit looking ever more likely, supply chains could face considerably more disruption than was caused by the snow and that could see many lines of fruit and vegetables, dairy products and products with a longer shelf life that currently come from the UK hit with delays.

Prices could climb and shortages could quickly become apparent while currency changes are likely to leave pricing all over the shop.

When the then-British prime minister David Cameron announced plans for a referendum in June 2015, 74p bought €1. After the referendum result was announced a year later, a euro cost 81p. Today the rate stands at 89p to the euro and there is speculation that in the aftermath of the hardest Brexit, sterling will reach parity with the euro.

While that, technically, would make products made in the UK cheaper for people in the Republic – and it will certainly make products bought directly from there cheaper – the more far-reaching consequences of no deal will see trade disrupted and the cost of many products climbing significantly.

All told, more than €4 billion worth of British food and drink is consumed in the Republic each year and this country is the UK’s main export market for groceries. In a no-deal scenario, prices are going to climb and products that are commonly found on our shelves could disappear entirely, at least for a spell.

Economists John FitzGerald and Edgar Morgenroth wrote a paper for the Institute of International and European Affairs last year which said that two thirds of the products on our supermarket shelves are made in the UK or come through there, and that a no-deal Brexit would likely to lead to delays on many of those products reaching Irish shops.

Cereals could rise by up to 30 per cent in a hard-Brexit scenario, while milk, cheese and egg prices could increase 46 per cent

And according to a separate report published by the Economic and Social Research Institute a no-deal Brexit could cost each Irish household an average of €1,400 a year as prices rise. That is about €3,000 before tax.

The ESRI used a database of more than 4,500 products routinely imported from Britain and found that the price of bread and cereals in the Republic could rise by up to 30 per cent in a hard-Brexit scenario, while milk, cheese and egg prices could increase 46 per cent. A range of products – including meat, sugar, confectionery, coffee, tea and mineral water – are also likely to increase by 20-30 per cent.

The overall effect of these changes would increase the average cost of living for Irish households by 2-3.1 per cent which, in cash terms. means an annual cost of €892-€1,360 per household.

Along with the price hikes there will be shortages, as many products will have to take a torturous route to Ireland or be blocked entirely.

Own-brand groceries: Around 40 per cent of a typical Irish shopping trolley is now made up of own-brand products sold by the big five supermarkets – Dunnes Stores, Tesco, SuperValu, Aldi and Lidl. While a growing number of own-brand products are sourced locally, many more are produced by manufacturers in the UK. In the absence of a deal, many are likely to be in short supply, at least in the short term. The supply chains set up by some big players also mean there is a significant reliance on UK-based warehouses for many products which could be problematic.

Lyons Tea
In the Irish tea wars Lyons remains marginally ahead of Barry’s but while the latter is produced in Cork and will be protected from Brexit-Shock, the former is made in the UK and owned by Unilever. In a worst case scenario, the price of the tea beloved by so many Irish people could climb by more than 20 per cent, which would be great news for the Barry’s people but bad news for many others.

Heinz
The beans, soups, sauces and salad creams made under this brand most likely come from the Kitt Green factory in Wigan. It has multiple product lines churning in excess of a billion different products out each year before shipping them around the world. Many of those products end up on trucks bound for Ireland.

Lucozade/Ribena
Just two of the more popular soft drinks available in the Republic that are likely to be either in short supply or more expensive in a post -Brexit world, as both product lines are manufactured in a giant processing plant in England’s Forrest of Dean.

HB Ice Cream
While the old-school treat is still named after the Rathfarnham farm where is was born, it too is owned by Unilever. It closed its Irish manufacturing plant almost 15 years ago and all the ice cream sold under this brand is, in fact, made in England.

Coca Cola
It is the most popular soft-drink maker in Ireland and while it has a bottling plant in the Republic, it also has one in Northern Ireland so will have to figure out ways to ensure supply is unaffected with border-crossing difficulties on the cards.

Fairy Liquid
This is by some measure Ireland’s most popular washing-up liquid but as it is made in England, if the worst fears are realised, it could be in shorter supply in the year ahead.

McVitie’s
It is not just the chocolate digestives that will come under the Brexit cosh but all the biscuits in the range including Hob Nobs, Jaffa Cakes and Penguin bars.

Jammie Dodgers
They’re likely to be scarce too as Burton’s Biscuits, the company behind the beloved brand has its main factory in south Wales.

Fever Tree Tonic
The flow of fastest growing tonic water in Ireland is likely to hit some class of dam as it is an English product and supply will either dry up or prices will jump by around 25 per cent.

It is not just the availability of brands that could be problematic though.

While air traffic between Britain and the European Union will not be grounded immediately after a no-deal Brexit, the arrangement that will keep them in the air is short term and will expire within 12 months, after which either a longer-term deal will take its place or UK and EU-licensed airlines will lose the automatic right to operate air services between one jurisdiction and the other.

A hard Brexit will mean higher costs on goods bought online from Asos, Amazon or any other retailers based in the UK. Any item that costs more than €22 and comes from outside the EU is now liable to VAT, and any item over €150 is also liable to customs, chargeable on some products, notably clothing.

Caps on roaming across the EU means Irish people now pay the same when calling, texting or downloading data in the UK as they do at home. With a hard Brexit, making calls, sending texts or mindlessly scanning your influencer-of-choice’s instagram feed while doing your cross-Border shopping in Newry could end up costing a fortune.

If a hard Brexit happens, Britain may well leave the single European payments area (Sepa). That has made electronic transfers across all Sepa states cheaper and faster and gave consumers greater control over their finances than ever before.

Almost 90 per cent of our total energy requirements are imported, with most of it coming through the UK. It is a business worth about €4.6 billion each year, and difficulties in that space will almost certainly lead to higher energy costs which could see Irish consumers paying hundreds of euro more each year to heat and light their homes. Product prices across the board would almost certainly climb too as the energy cost base for Irish manufacturers would rise.

As many as 60 per cent of medicines and pharmaceutical products sold in Ireland are made in, or travel through, the UK, and in a post-Brexit world, the UK will leave the EU pharmaceutical regulation regime. That means new regulatory arrangements will be needed for UK goods sold here. That is likely to be problematic, although the Government does not expect general medicine shortages in the short term. The HSE and the Health Products Regulatory Authority have been drafting contingency plans for a no-deal Brexit and measures should be in place in time to facilitate the fast-tracking of drugs into the country.

*This article was edited on January 16th as an earlier version incorrectly stated Cully & Sully Soup is made in the UK. The soup continues to be made in Galway and Kilkenny.