More than 30 per cent of people have never changed their online passwords, survey finds 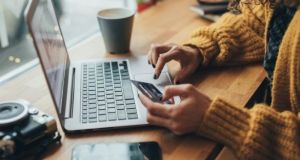 The survey points to a surge in online shopping as a result of Covid-19 retail restrictions and an increased emphasis being placed social distancing and avoiding large crowds.

Almost one in five people who shop online say they would follow a link if it promised them a great deal without taking tthe necessary steps to protect themselves new research suggests.

The survey found that 36 per cent of the same cohort said they would move money from their account to keep it safe from fraud if asked by someone claiming to be from their bank even though a bank would never contact a customer with a request of that nature.

The risky behaviour and the worrying lack of awareness of the level of fraudulent activity on the internet comes as the survey points to a surge in online shopping as a result of Covid-19 retail restrictions and an increased emphasis being placed social distancing and avoiding large crowds.

All told, 47 per cent of respondents said they were shopping more online now than before the start of the coronavirus crisis.

The survey of 927 online shoppers by Ulster Bank shows an increased awareness when it comes to safely buying goods online with 75 per cent of those surveyed saying they felt they had taken all necessary precautions to shop safely online.

Black Friday was invented in the 1930s in the US and falls on the day after Thanksgiving, traditionally kick-starting the Christmas shopping season in the US. Many retailers offer bargains and discounts.

“Fraudsters are getting more sophisticated and will stop at nothing to part people from their money and their personal information.”

She said awareness programmes were vital and added that while it was encouraging that over two-thirds of people said they would not be embarrassed to tell their friends and family they had been the victim of fraud, there was more work to do in other areas.

She said the best advice she could give to people was “to really think before you click and make sure that you and your money are safe”.

The survey found two thirds of respondents shop online once a month or more often, with those aged 18-24 significantly more likely to shop online with this frequency at 84 per cent, falling to 44 per cent among those aged over-65.

With Christmas just over six weeks away, a quarter of those who took part said they had started their festive shopping earlier this year with 9 per cent claiming it was complete.

Meanwhile, the Garda has said that from the start of the year until the end of last month a total of 489 online shopping frauds were reported to the authorities with average loss put at €2,306 per incident, representing an overall loss of €1,127,972.

In a release, the garda said that among the steps people need to follow to keep themselves safe online are to only buy from trusted sources and to ensure data transfer is secure. People were warned to never send card details by email, text or other messaging methods and to never send money to someone that is not known to them or a recognised seller.