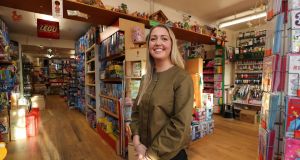 Katherine Staunton of Nimble Fingers top shop in Stillorgan, Dublin. ‘In December we do 25 per cent of our annual turnover and November wouldn’t be far behind. We simply can’t make that up,’ she says. Photograph: Nick Bradshaw

Toy shop operators fear that parents – afraid they will be unable to secure must-have gifts for their children – will turn to major online retailers in the run-up to Christmas while they are unable to open due to coronavirus restrictions.

While many toy shops are selling goods online, this trade will not make up for the sales lost while their shops are shuttered for six weeks in the lead-up to Christmas. Toy shop owners say that, unlike other retailers, they will be unable to recoup their losses in the new year as their busiest time of the year will have passed.

Daithí O’Connor, of World of Wonder, which has six toy stores across Munster, said some 40 per cent of yearly toy sales are recorded in the last 10 weeks of the year.

He said toys are “as essential for the Christmas period as hardware was for the summer period” but his and other businesses were “not being given this equal consideration” by the Government.

Mr O’Connor said that unlike other non-essential purchases, “as the lockdown progresses parents will begin to panic and try get their toys anywhere they can”.

“This will probably be online,” he said, adding that up to 70 per cent of online shopping was done through companies based overseas.

He said this would “leave a lot less business, particularly for smaller Irish retailers when and if we are let open”.

While other non-essential retailers “will have a huge post-Christmas sale and will in many if not most instances do more business in the weeks after Christmas than before”, he said this not the case for toy shops who know well that “if you haven’t sold any particular toy by December 24th, then you will not sell it at any price”.

“It would in fact be safer rather than trying to squeeze 10 weeks’ business into 24 days, a reality that would be unique to toys,” he said.

Katherine Staunton, of Nimble Fingers in Stillorgan, Dublin, was similarly downbeat about the impact the lockdown would have on her business in the weeks ahead.

“Because it is happening in November it will hit us pretty hard,” she said. “If it had been almost any other month of the year it wouldn’t be so bad.

“In December we do 25 per cent of our annual turnover and November wouldn’t be far behind. We simply can’t make that up.”

She said people opting to shop locally had made “a huge difference to us, we have seen people making a more conscious decision to buy off businesses in their community” but there will be much ground to be made up.

Ms Staunton is a second-generation toy seller and Nimble Fingers was the inspiration for the Late Late Toy Show. RTÉ researcher Pan Collins visited in 1975 and was mesmerised by the selection and decided to pitch the idea of devoting a 30-minute segment of the programme to toys in the run-up to Christmas.

Presenter Gay Byrne agreed and the slot was so successful that a full show was dedicated to the subject the following year. The annual broadcast has become a fixture for many children growing up in Ireland and continues 45 years on.

Ms Staunton said that while conventional wisdom has it that parents hold off on major purchases until after their child or children have written to Santa, she believes this year will be different.

She said in recent weeks people had appeared a lot more organised than in past years.

“There haven’t been many people giving out about Christmas talk coming too soon in 2020,” she said. “I think this year there will be a lot of kids who may have to take what they are given.”