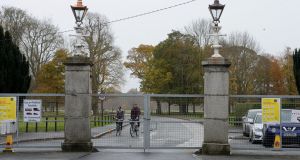 The Ashtown Gates to the Phoenix Park will remain locked for the next five weekends. Photograph: Alan Betson

There was a noticeable drop in traffic in Dublin’s Phoenix Park at the weekend following the closure of all but two of the park entrances.

The closure of six peripheral gates meant gardaí had to man only the Castleknock and Parkgate Street entrances, at either end of Chesterfield Avenue, to check if motorists were remaining within their 5km limit.

A garda on duty at the Parkgate Street entrance said the closure of the six gates, and some side roads leading to them, had not led to an increase in traffic on Chesterfield Avenue and he said “very few” drivers had to be turned around for breaking the Level 5 coronavirus restrictions.

The decision of the Office of Public Works on Friday afternoon to close the gates on Saturday and Sunday for the next five weekends followed particularly heavy traffic in the park over the bank holiday weekend, with motorists blocking footpaths and parking on the grass, both prohibited under the park’s bylaws.

The numbers partaking in a “virtual” Dublin city marathon and the good weather had likely contributed to the increase in visitors that weekend, the garda said.

While car numbers were down, there were still plenty of walkers and cyclists enjoying the brief respites between storms, particularly on Wellington Road, which was closed to traffic.

“It’s much more peaceful, you can hear the sound of the Liffey below us and the wind in the trees,” Annette O’Mara said. “I live nearby, and I do have a car but I haven’t driven into the park since March, you get used to it and it’s good exercise, and I’d say the deer prefer it.”

Donal Breatnach, who lives in Stoneybatter, said he would prefer to see an end to commuter traffic using Chesterfield Avenue. “This is great, having no cars here, but I would rather no through traffic in the park, although I appreciate that might cause problems for people in Castleknock.”

Colm Maguire said he sometimes drove his car from the Tenters to the park, but said he would be in favour of greater traffic restrictions in the future. “It’s a park, there should be less traffic in it.”

Not all drivers were pleased with the gate closures. “It’s very annoying,” said Kevin Connolly, who had driven from Finglas with his wife, Rhonda, and children Evan (8) and Adam (4).

“We come here every day. The weather isn’t great today, but if it’s a nice day there won’t be anywhere to park, because they have closed several of the car parks along with the gates. It doesn’t make sense, because if you’re going by the Nphet rules on social distance, you shouldn’t be forcing people into the same area.”

Ms Connolly said: “We planned to bring my father today, who’s 79, but we decided not to because we were worried we wouldn’t get parking.”

Darragh Halpenny and Karen Cadoo, who had driven from Ranelagh with Sadhbh (8), said shutting the gates gave the wrong message during the pandemic. “They should be incentivising people to come to the park, but this will act as a psychological disincentive as it’s an unwelcoming gesture for people who have to drive.”

Ms Cadoo said restricting motorists meant people would say in confined areas of the park instead of “spreading out to appreciate what a wonderful amenity it is”.