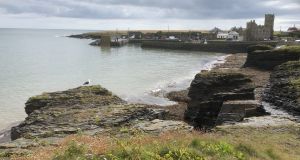 For those us growing up in Wexford town, the “Hook” meant shoaling mackerel, funny-sounding Baginbun Head and real fright as we sped home past haunted Loftus Hall. It also meant the sweetest and healthiest air in Co Wexford – or so our Dad claimed as he drove us out there for a cure whenever we had a cold or the sniffles.

In time, all these memories were richly overlain with stories of shipwrecks and the valour of local lifeboatmen, of Strongbow and the Normans and Cromwell and his New Model Army, the first intent on staying, the second on a quick dose of murder and mayhem. We read of ancient hermitages and abbeys and Welsh monks and the Knights Templar, and of Spanish Armada wrecks and their supposed gold at Dollar Bay; and we marvelled at how imbued with story this small corner of Ireland was.

Over all the decades since, we’ve swum its beautiful beaches and scuba-dived its crystal-clear canyons, studied its limestone fossils, cycled its quiet roads, climbed the tower and drunk coffee at the Hook. But for me as a kid, nothing since has matched the excitement of running down the rocks at Slade harbour to join happy anglers lofting mackerel out of a sprat-frenzied sea, under a gull-frenzied sky.

And now we were back at Slade, intent on walking probably the most elemental part of the Wexford coast, with Hook Lighthouse before us as our guide and destination. We were in the company of Stephen Cox of Fethard-on-Sea, a mine of information on his much-loved peninsula. As we arrived, Fr Michael Doyle was performing the annual blessing of the boats in the harbour, and we paused and drank tea with the local people and RNLI volunteers. And there, under Slade’s 15th-century tower, we heard how good and bad the sea around the Hook can be.

The walk is at most 3km and the going is flat, grassy and easy. That day’s heaving, foam-streaked ocean was a soothing and awe-inspiring presence, its agitated mood reflecting the storm of the day before. Great sloping platforms of fissured limestone and abrupt cliff faces provided perches for hopeful anglers, and lazy grey shower curtains darkened distant sea and sky.

Nearing the lighthouse, the Waterford shore of Crooke came into view, as well as the distant Comeraghs, and a little white sailing boat dramatically placed itself between us and a slate-grey squall. On this Sunday the environs of the lighthouse were thronged with visitors and vehicles, and so we passed up on the coffee. We took the same way back, admiring the whole south shore and offshore islands of this special county as we went

The afternoon sun fell on Kilmore Quay and the great windmills of Carnsore Point, and only the headland of Baginbun stayed in shadow, reflecting perhaps its more questionable contribution to Ireland’s story in 1170.

Map None needed, linear route along the shore
Start/finish Slade harbour, Hook peninsula
Effort 6km round trip, no climbing, easy (some walls to be surmounted)
Facilities Restaurant and tours at the lighthouse