Experience the Force: A guide to the Star Wars magic in Kerry

With the Skelligs set to play a large part in ‘The Last Jedi’, tourism is booming in the Wild Atlantic Way 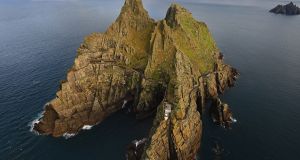 There is no bad way to see the Skelligs, any angle you approach them from demonstrates their sheer absurdity, but doing so from the air is exhilarating, awe-inspiring and ridiculously opulent. Photograph: Valerie O’Sullivan

“And down there is where Rey met Luke Skywalker for the first time,” says Naoise Barry of Aerial Adventure over the roar of the helicopter’s engine. We nod sagely at this, as though discussing events from a history book rather than something that happened a long time ago in a fictional galaxy far, far away.

The helicopter banks and as it takes another pass of the island, the distinctive beehive huts of Skellig Michael appear, encircled by birds, and still almost exactly as they were when originally built 1,500 years ago. A thousand feet below, the Atlantic wind spills ink blot stains across the ocean. George Bernard Shaw described the Skelligs as an “incredible, impossible, mad place” that is “part of our dream world”, so perhaps it makes sense that they are now part of the fantasy folklore of Star Wars.

There is no bad way to see the Skelligs, any angle you approach them from demonstrates their sheer absurdity, but doing so from the air is exhilarating, awe-inspiring and ridiculously opulent. We’ll explain just how opulent later.

The monks that started building on the island around the year 600AD would have had to make their treacherous journey in currachs. They wanted isolation to bring them closer to God, and so they went to an island eight miles off the Irish coast, but at the very edge of the known world.

Their lives there were shockingly hard – all died quite young and most with severe rheumatism. The damp would have been insidious, as lighting a fire on the island was impossible (there was nothing to burn) while their diet would have consisted entirely of birds, eggs, fish and seaweed. The buildings would have been painstakingly constructed over generations, likewise the 600ish steps carved into the solid rock of the slopes. It’s believed only 12 monks were ever on the island at any one time and, almost comically, there was a hermit’s lodge located away from the island’s main settlement – just in case you needed more seclusion while living on the most isolated island on the planet.

And the wifi reception was rubbish.

As impressive as the Unesco World Heritage site is, no one doubts that the Star Wars connection is going to send tourism in the area into something close to light speed. The Skelligs, or planet Ahch-to as they are known, look set to play a large part in Star Wars VIII: The Last Jedi, following on from their brief cameo at the end of The Force Awakens. But the production was only granted four days to shoot on Skellig Michael itself which meant similar locations had to be found for the other three weeks of shooting needed.

The basic upshot is that Ahch-to is now many of the more stunning spots along the Wild Atlantic Way, including Malin Head, Mizen Head, Loop Head and large chunks of the Dingle Peninsula.

The beehive huts of Skellig Michael were recreated in their entirety on the brow of Ceann Sibéal, in Ballyferriter. The huge operation, largely overseen by Irish crews, included building a metallic road that climbed the entire length of the head, as the crew weren’t permitted to land helicopters there, presumably as Heather Humphreys would appear in a cloud of choughs and chase them away.

Since then, roughly April 2016, interest in the area has grown steadily. Traffic jams, on roads not designed for traffic jams, became common when shooting started as locals and tourists stopped to rubberneck on the production. One enterprising and borderline suicidal French man took to rock climbing on the cliff face in an effort to reach the site.

We pop into Louis Mulcahy Pottery, sitting opposite the bronzed headland, for a bite to eat and discover they had a far saner solution to spying on events – a telescope nicely positioned in the upstairs cafe. Smart.

Mulcahy’s gives you a chance to try your hand at the pottery wheel, but we decide to copy what the local kids have been doing and try to create a porg. If you don’t know what that is, you will soon, as it’s expected to be one of the biggest toys this Christmas. It’s also a good example of Kerry rubbing off on Star Wars, rather than the other way around. Apparently Last Jedi director Rian Johnson became fascinated with the puffins on the Skelligs and got a new creature designed for the movie along similar lines. Hence the porg.

The kids are called upon to inspect our designs. They are not impressed. They have however whipped up an excellent version of Jabba the Hut while we laboured, which they display gleefully in our unartistic faces.

An example of how Star Wars has rubbed off on Kerry is the fact that Portmagee has temporarily renamed itself Porgmagee ahead of the new film’s release. Yes indeed. Gerard Kennedy runs the Moorings Guesthouse in the town and has fully embraced the advertising potential for the area, while freely admitting that, like many of the locals, he didn’t know his Anakins from his elbow just a few short years ago.

“If it was Mrs Brown’s Boys everybody would have recognised them.”

There’s no worries that a huge influx of tourists could change the area?

“The place won’t lose its identity, people are staying calm about this. I think how much it changes is up to us. The regular’s stool at the bar being taken is a worry, but there are a lot of people employed in tourism in the area and the hope is that a rising tide lifts all boats.”

Many of the boats that head for Skellig Michael depart from right outside Kennedy’s door, in Portmagee harbour, but getting to the islands is still no easy feat, even if we’ve moved on a long way from currachs. For one thing, boats are only allowed land at the island from mid-May to the end of September.

Rich in beauty and history

The ocean turns many stomachs a long way before reaching land, and the perilous climbing once on the island means that it is no place to bring kids. As recently as 2009 two tourists died on Skellig Michael in separate falls. Also the swells around the island mean that your chances of the boat being able to land are little better than 50/50. You pay your money, probably in the region of €70, and you take your chances. In short, getting there is an ordeal, and might require more than one day’s work. Small wonder that Failte Ireland are working on a virtual reality tour for the experience.

Thankfully it’s not like there’s a lack of things to do in the area. The Skellig Experience on Valentia Island has just celebrated 25 years open, while Ballinskelligs village is rich in beauty and history, containing the Monks trail, including an abbey that was the land base for monks journeying to the Skelligs.

You could take in the strangely incongruous barracks in Caherciveen, a fairytale-style castle with round turrets, rumoured to have been accidentally built by the British Empire in the town after blueprints destined for India went astray.

You could do some star gazing in the local Dark Sky reserve, the only gold tier ranked-reserve in the northern hemisphere. Or you could visit the Kerry Cliffs outside Portmagee. En route you’ll pass a sign that boasts “Kerry’s most spectacular cliffs, 3km”, which sounds like idle talk until you get there and see them, all Daliesque angles and ridges. Although be warned, there is a cover charge.

Which brings us back to that opulent helicopter. Aerial Adventure was founded by film producer Naoise Barry with a view to giving clients a behind-the-scenes experience of some of the locations used, utilising his work as production executive in charge of the Irish portions of The Last Jedi. You get the tour and genuine insight. And sight-seeing from a helicopter seems like the perfect way to combat those Atlantic swells. So how much does the full-day Star Wars helicopter tour cost?

“Most of our business is in boats or on land. People can tailor their tours to see the sights they want to. Most of the helicopter bookings tend to come from overseas,” says Barry, stalling slightly. Ballpark figure? “Slightly less than €2,000.”

Hmmm. Is there any room left in that currach?

Heaton’s Guesthouse, Dingle, Co Kerry: the kind of place that points out the complimentary chocolate cake before you even have a chance to check in; heatonsdingle.com

Visit the Skellig Chocolate factory: see the chocolate being made and, more importantly, taste it; skelligschocolate.com

Lockdown was hard, but it kept us closer to each other than we’ve ever been
6

‘Game changer’: Could a €300 voucher transform the lives of Irish children?
7