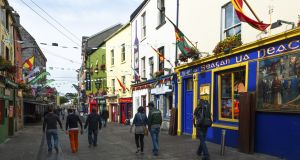 “Brilliantly bohemian” Galway has been named “one of the world’s top cities for travellers in 2020” by travel guide Lonely Planet. The city scooped the accolade in Lonely Planet’s Best in Travel 2020, its annual collection of the best travel destinations, trends, journeys and experiences for next year.

Galway features fourth in the list of top cities for 2020.

The timing couldn’t be better, as the city prepares to begin its year as European Capital of Culture on February 1st. After more than 18 months of controversy, financial woes and resignations, Galway 2020 finally pulled it together and last month unveiled its cultural programme for the year.

Planning 12 months of culture, both large-scale and intimate, it starts with a week-long celebration in towns and villages across the county, culminating in a large public ceremony and spectacle on February 8th in Galway city.

Galway 2020 chief executive Patricia Philbin said: “It’s official – Galway is the place to be in 2020!” The travel accolade is “a fantastic endorsement of this incredible place on the western edge of Ireland and at the heart of Europe,” said Philbin.

“As 2020 approaches we are inviting people from right around the world to come and experience Galway in this special year.”

Some of the “unmissable experiences” the Lonely Planet’s experts picked out in Galway include:

– “Taking in live music at Tig Cóilí where the walls are decorated with photos of those who’ve played there, and two live traditional music sessions a day draw the crowds.” On Mainguard Street at the end of Shop Street, Tig Cóilí describes itself as “a country pub in the middle of the city”.

– “Feeling at home at the Tigh Neachtain pub, where timber walls frame a roaring fire and locals crack gentle jokes.” One of the city’s oldest pubs, at the corner of Cross Street and Quay St, has been around since 1894.

– “Enjoying the groundbreaking flavour combos atLoam, where Galway’s culinary heart beats strongest and home-grown, locally sourced and foraged ingredients rule.” Chef-proprietor Enda McEvoy’s restaurant on Fairgreen Road has had a Michelin star since 2016 and was voted best restaurant in Ireland at the 2019 Irish Restaurant Awards.

Tom Hall, Lonely Planet’s vice-president of experience, said: “Exuberant, vibrant and full of imagination, Galway in 2020 will be home to a year-long celebration and amplification of culture and creativity which travellers will love”.

Its Best in Travel lists start each year with nominations from Lonely Planet’s staff, writers, bloggers and publishing partners. Nominations are whittled down by a panel to 10 countries, 10 regions, 10 cities and 10 best value destinations, chosen for topicality, unique experiences and “wow” factor.

Galway is fourth of the top cities, after Salzburg, Austria (which has a festival of music and drama next year), Washington DC, and Cairo, Egypt.

Bhutan – the kingdom set to become the first fully organic nation by 2020 – is named number-one country to visit in 2020.

Best in Travel 2020 is Lonely Planet’s 15th annual collection of the world’s hottest destinations and journeys for next year, when it places particular emphasis on the best sustainable travel experiences.