Cycling the Berlin Wall nearly 30 years after its fall 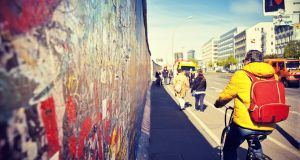 A tourist on a bike rides along the East Side Gallery, an international memorial for freedom with paintings by artists from all over the world on one of the longest remaining sections of the Berlin Wall.

One of the most remarkable things about the Berlin Wall is that there is so little of it left. It has now been down for longer than it stood, but the moment it fell, it reshaped the mental map not just of Berlin, but of the entire continent of Europe.

Cycling through the now gentrified suburb of Prenzlauer Berg, I’m trying to keep up with Sascha Möllering from Berlin on Bike, who’s showing me part of the Mauerweg, the cycle trail that follows the course of the former wall. Unlike most walls built to keep people out, this was designed to keep people in, people like Möllering’s father who fled shortly before it was constructed in 1961.

“He had left earlier and got a West German passport. He used to go back sometimes at weekends, but the border guards got suspicious, and he was jailed for a year. When he got out of jail he left again. He had nightmares for years,” he says.

We get off our bikes to cross a pedestrian bridge, and Möllering points upwards to a building covered in bullet holes. This part of Berlin is heavy with history, the scene of fierce fighting as the Russians arrived in 1945, their tanks rolling down Borhnolmerstrasse.

We come to a piece of wall near the Bosebrucke Bridge. Underneath us was a once a border checkpoint for cars crossing from West Berlin. Now it’s a Lidl carpark. A panel of photos shows young people with 1980s hairstyles and huge smiles streaming through the wall on the night of November 9th, 1989. Earlier that day it had been announced that in future, citizens of the GDR would be allowed to apply for exit permits. Thousands came down to the wall. The officer in charge tried calling his superiors, but nobody answered. By then there were 20,000 people and 60 soldiers. They opened the gate and let the people through.

“I was 15. I was watching it on TV and my mother said to me, ‘what are you still doing here?’” says Möllering. “I went to the Brandenburg Gate. I saw a girl giving an East German soldier a rose. He put it on his lapel, and I knew then it was over.”

We freewheel down an embankment, past neatly tended allotments, and into the gentler, greener world of the Mauerpark. Here the cycle path has been planted with thousands of cherry trees, a gift from the Japanese people after the wall fell. They soften the edges of what was, quite literally, a death strip. At least 138 people were killed trying to cross from east to west. In some places the wall followed the course of the river, and as long as you were still in the water, the East German border guards could shoot you.

We stop for a coffee in an all-white hipster cafe serving dozens of single origin coffees, and Möllering recalls the crazy months that followed the fall of the wall, when crossing into the east was exciting and scary at the same time.

“It was so dark and everything was different. There were techno parties between the walls, in No Man’s Land, sometimes even on the watchtowers. It was like the Wild West - the police didn’t care about anything.”

Back in the saddle I bump over a double set of cobblestones, which mark the wall in the city centre, a line of memory crossed by thousands of wheels and footsteps every day.

In other parts of Berlin that were part of the wall, like the Brandenburg Gate, the East Side Gallery and Checkpoint Charlie there are hordes of selfie stick-wielding tourists, stalls selling currywurst, and an almost carnival atmosphere. But as we pedal along Bernauer Strasse we come face to face with what it was really like, for those who lived on the wrong side.

This is the longest stretch of wall in its original condition. From the viewing platform on top of the Gedenkestatte Berliner Mauer documentation centre, you can see clearly that this was not one wall but two; an outer and inner wall, the strip of land in between patrolled by 300 dogs and hundreds of soldiers. Five people lost their lives along this short stretch. Dozens more escaped, some of them jumping from the windows of their houses, others by digging tunnels, helped by people on the other side.

A watchtower (found on eBay) is one of the few that stands guard, a concrete symbol of the brutal barrier that physically and mentally trapped the people of East Berlin, and a warning to us all of how something so monstrous can become accepted as the status quo.

“I lived with this,” says Möllering. “We never thought about it. We thought it was normal.”

The symbol of Berlin, this triumphal arch was the backdrop to some of its greatest and most terrible moments.

The western side of the wall was always full of graffiti - but that wasn’t allowed on the east side. These days a long stretch of wall is an open-air gallery featuring artists from 21 countries

During the cold war this was the only crossing point for foreigners. The small museum (mauermuseum.de) highlights the escape routes used by GDR residents, but the centre and memorial at Bernauer Strasse is a more interesting and authentic experience. berliner-mauer-gedenkstaette.de

Trabant cars, East German fashion and other exhibits offer a quirky taste of daily life in the old East. ddr-museum.de

A visit to the headquarters of the East German secret police highlights the dark side of life under communism. stasimuseum.de

Aer Lingus and Ryanair both fly from Dublin to Berlin

Guided bike tours: Berlin on Bike offers a 3.5 hour Berlin Wall tour at 11am daily for €24 including bike hire (€19 if you bring your own wheels). berlinonbike.de

The Berlin Welcome Card (€20 for 48 hours) covers public transport (S and U bahn, trams and buses, including from the airport). There are also versions that include museum entry. berlin-welcomecard.de/en

There are events in Berlin throughout the year to mark the 30th anniversary of the fall of the wall, and a festival from November 4th to 10th. See visitberlin.de