Fion Davenport rounds up this week's travel news and deals 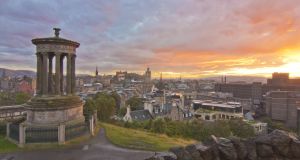 Our micro-guide to Edinburgh will show yo uwhere to stay, what to do, and what to eat

RENTERS’ TOP 40: What do a Parisian houseboat, a private villa in Palm Springs and a school in Kells have in common? They are all in Airbnb’s Top 40 wishlist of accommodations. The popular home-sharing website, which broke its daily record on New Year’s Eve by topping one million renters, has released its list of favourite properties among users. Top of the tree is a cubehouse in the centre of Rotterdam, followed by the Nakagin Capsule Tower in Tokyo, designed by Kisho Kurokowa in 1972 and a “rare built example of Japanese metabolism”. Headfort House in Kells is fifth, but only for large groups as it is still a working school and will cost you €1,234 a night. The list is top-heavy with interesting properties like treehouses and yurts, also lighthouses, caves, trains and cabins. See airbnb.ie

ZERO-WASTE DINING: Crisps made from vegetable peel and dehydrated husks as garnish? It is what you can expect to see on the menu of Tiny Leaf (tinyleaflondon.com), which opened in London’s Notting Hill last week. The four-storey organic and vegetarian restaurant is the brainchild of food activist and chef Justin Horne, whose intention is to “change people’s perception of what waste is”. The UK throws away 18 million tonnes of food every year.

Menus change daily depending on deliveries, so one day you might get courgetti with hemp pesto, the next day broccoli steaks with baba ganoush. It is the second zero-waste restaurant to open in the UK after Silo (silobrighton.com), opened by ex- Noma chef Douglas McMaster in 2014. MARRIAGE & MUSEUMS – LAS VEGAS STYLE: It could only happen in Vegas: saying “I do” in a container park. The city’s newest wedding chapel is in the Downtown Container Park shopping and entertainment district, made exclusively out of repurposed shipping containers.

The Lucky Little Chapel (luckylittlechapel.com) has packages, starting at £75 with the Fakeout – a mock wedding to surprise your family and friends.

You can also visit the nearby Mob Museum (themobmuseum.org), which from April is introducing the Moe-Bot, a robot that will do the visiting for you – and you can control it from your home computer.

PASSING THROUGH STOCKHOLM: Stockholm is one of Europe’s pricier capitals but a new visitor pass can save a lot of money. The Stockholm Pass includes free, fast-track entry to more than 60 attractions, including the Royal Palace, Vasa Museum and the Nobel Museum. Also free are a host of boat and bus tours, such as the boat tour and visit to Drottningholm Palace, which would normally cost 205 krona (€22). There are one-, two-, three- and five-day options from 595 krona (€64) to 1,295 krona (€140), with child passes roughly half price; see stockholmpass.com

GET AWAY AT HOME: The Fitzwilliam Hotel (fitzwilliamhoteldublin.com) has a Sleep & Dream B&B package for two for €229 a night and is offering all visitors to Dublin a free audio guide to the area around St Stephen’s Green by local historian Donal Fallon. Just download the podcast from the website. Rathsallagh House (rathsallagh.com) in Co Wicklow has a Punchestown Festival package from €289 per person sharing that includes two nights B&B and dinner one night, valid from April 26th-29th. Finally, Ballymaloe (ballymaloe.ie) has a B&B overnight plus five-course dinner to celebrate St Patrick’s Day from €180 per person sharing, valid from March 12th-16th.

MICROGUIDE – EDINBURGH:
STAY Scotsman Hotel (20 North Bridge; thescotsmanhotel.com; room from £250). The former offices of the Scotsman newspaper have been converted into a luxury hotel. with some rooms overlooking New Town and Calton Hill.
EAT Fishers Bistro (58 Thistle Street; fishersbistros.co.uk; mains from £18). An elegant spot that specialises in locally sourced seafood and meats.
SEE Arthur’s Seat (Holyrood Park) The 45-minute-or-so hike up to the rocky peak of Arthur’s Seat is rewarded with superb views of the whole city.

FIVE THINGS TO DO IN PARIS FOR VALENTINE’S: Ireland play France in Paris next Saturday and Sunday is Valentine’s Day, making it the perfect Paris weekend (so long as the result is right). Here are five things to see and do in the city of light . . .

Louis Vuitton Show (Grand Palais; until February 21st) Volez, Voguez, Voyagez documents 160 years of bags and trunks by Vuitton, who started his company in 1854 and became synonymous with luxury and innovation. The exhibition has hundreds of signature pieces divided into themes like Expeditions and Sophisticated Dandies. Admission is free, but the catalogue costs €140; see grandpalais.fr

A Fashionable Tour This three-hour walking tour through the city takes in the history of couture and some of its best- known names, including Vuitton, Chanel and Dior. You’ll explore the side-street studios of the early stylists and find out about the birth of the Paris’s famous department stores. The tour costs €80; see contexttravel.com

Wine Tasting How about a 2½-hour tasting course in the heart of the Latin Quarter? Wine Tasting in Paris (14 rue des Boulangers, 75005) runs courses between 5pm-7.30pm on Tuesdays, Thursdays and Saturdays, for €60 a head. Each class includes sampling six different wines and a Champagne; you can also include cheese or charcuterie. wine-tasting-in-paris.com

Dinner at Le Grand Véfour (17 rue de Beaujolais, 75001; lunch menu €115) Romantic restaurants are a dime a dozen, but none can match this 18th-century spot for elegance. It opened in 1784 and has been serving exquisite cuisine to the city’s elite since. Napoleon, Victor Hugo and Colette have all dined here. Book in advance. grand-vefour.com

Up, Up . . . But Not Away Le Ballon Air de Paris (Parc André Citroën, 2 rue de la Montagne de la Fage, 75015; €12) affords spectacular views from a hot air balloon over the city without losing touch with the ground. Confirm ahead as it won’t fly in windy conditions. ballondeparis.com