Walk for the Weekend: Nohoval Cove frequently appears on lists of ‘10 places you must visit in Co Cork’ 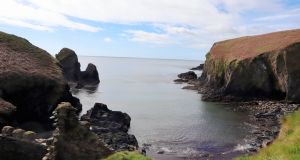 The atmosphere at the cove is enhanced by the ruins of castellated lime kilns. Nohoval Cove, Co Cork

A tourist who has traversed the entire Wild Atlantic Way from Malin Head to Kinsale may feel satiated with coastal views. But 10km to the east of Kinsale there is a cove which is little known outside of Cork but regarded almost with veneration by coastal cognoscenti.

I came to Ordnance Survey Maps in my first year in college and was immediately enraptured by them as I traced narrow networks of roads that led to intriguing little inlets and coves begging to be investigated. Cycling to the sea became an adventure for me and my friends, none more so than our first trip to Nohoval Cove, which took careful map reading to even find.

As we coasted downhill, we turned a corner into a narrow ravine at the end of which was a sliver of sparkling sea in an inlet encased by cliffs and sea stacks. Throwing our bikes against a ditch we headed up a narrow track leading to the top of the cliffs so that we would get an overall view.

We were startled momentarily to see below us a line of penguins on a natural terrace in the corner of the cove while a group of seals seemed to be frolicking in the waves. A closer look revealed that the “penguins” were a group of nuns bedecked in wimples and black habits sunbathing on rocks. The seals turned out to be some of the sisters swimming in long black bathing suits; the time being pre-Vatican II. They had sought out Nohoval Cove because it was so rarely visited.

Messers though we were in those days, we beat a gentlemanly retreat.

I have been back there on many occasions over the years, exploring the wave-scoured terraces or just sitting on the cliff-top marvelling at the sea stacks with their distinctive shapes caused by the steeply sloping shale strata of the area. Or lying with my head over the edge mesmerised by the changing patterns of light on the boulder-strewn sea bed as the wind ruffled the surface of the crystal clear waters. Or swimming lazily in waters warmed by a flood tide slowly creeping over rocks heated by the summer sun.

The atmosphere at the cove is enhanced by the ruins of castellated lime kilns. Unbelievably, ships once nosed their way in to this coast to collect slate and offload limestone.

The word about Nohoval Cove has spread over the years. It frequently appears on “10 places you must visit in Co Cork” lists and is popular with divers and kayakers. The road is still as narrow and there are still only a few parking spots, but that need not trouble the walker who sets out from Nohoval village: there is a delightful woodland walk (not a conifer to be seen) down through the ravine.*

Head east from the village for 800m and turn right on to an unsignposted road. It is easy to identify as there is an old stone wall on one corner and a galvanised gate on the other. The woodland walk starts at the end of the road.

It will be one of those short stroll lengthy linger kind of days.

Map: Ordnance Survey. Discovery Series, Sheet 87
Start/Finish: Large car park in the village of Nohoval (Written as Nohavel on maps but signposted as Nohoval). Grid Reference 724 523
How to get there: Turn left at the village of Belgooly on the Cork-Kinsale road on to R611. A right, a left, a right, a left will bring you to the village. All signposted.
Time: 1½ hours. Linger according to taste.
Distance: 4km
Ascent: 772m
Suitability: Route is easy
Food: Finder’s Inn, Nohoval

* Since this article was published, it has been pointed out that a considerable amount of the land adjacent to the cove is private property on which entry is prohibited.