How to holiday with kids: Travelling with teens 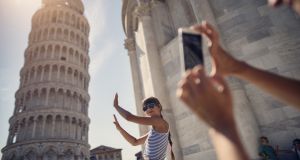 Travelling with teenagers can be the best fun; they have insights and opinions on everything they see while you don’t have to worry so much about losing them in a crowd. Photograph: Getty Images

One day you wake up to discover strangers in your home and it turns out you are required to feed them (constantly), pay their bills and put up with their many friends showing up at random times. The irony is that those strangers may be reluctant to go on holidays or trips with you at the time that you want them to, as you know they won’t be around forever.

Travelling with teenagers can be the best fun; they have insights and opinions on everything they see while you don’t have to worry so much about them eating the sand on the beach or losing them in a crowd on a busy city street. But make sure you plan your trip to make it work for everyone.

Taking the views of older children in the family into consideration is important – like anyone else, they are more likely to enjoy somewhere that they were interested in going to in the first place. Plus they often have great ideas from their friends’ family trips. A conversation over dinner in the middle of winter about places you might visit in the summer raises everyone’s spirits and you can involve the whole family in the planning.

Depending on the time and budget available to you, teenagers are more likely to be enthusiastic about a trip to a more exotic destination than those they visited as kids so it’s worth considering a long-haul trip. You may find that the relatively low costs of accommodation and restaurants in some countries outside of Europe go a long way towards making up for more expensive airfares. One of our sons loves a long-haul economy flight (despite his lankiness) – it seems that to him, sitting all day with a personal screen with games and films, while someone brings him food and drinks, is the ultimate teenage day out.

Some families choose to take a friend of their teenager with them and this can work really well, especially if the friend is well known to the family. Another option that has worked well for us is to holiday with another family, for some or all of the trip. We’ve done it a few times, sometimes booking separate accommodation in the same area, other times sharing a bigger place. It works really well for an active holiday like skiing, as the group can split according to ability – meaning the teens can chase each other dangerously fast down too-steep slopes, while others take it easy.

We recently booked a beautiful old villa in Italy between three families – it meant we could afford a place that would normally be out of our reach, and the fact that it was a bit rural didn’t matter as all the adults, teens and the younger kids had built-in company. Economies of scale meant that we could have a private pool and organise for someone to come to cook for us in the villa for a few nights – between three families, it worked out less expensive than eating out, especially after buying wine during the day while visiting local vineyards.

We allowed a set amount of tech time in the evening – we planned ahead and brought some tech games with us so the teens could have a tournament before dinner and then be done until the following evening. It would be lovely to say we totally banned technology for the week but it allowed us to do lots of sightseeing in the beautiful Umbrian towns during the day with everyone in tow (and with limited moaning), and then the kids could blow off steam in the evenings.

Some evenings they played in the pool before dinner rather than the virtual games – they invented a version of pool basketball (the rules were unclear to us!) and were very happy to work up an appetite that way instead.

As we like to do lots of sightseeing on a holiday, compromise is really important, so we try to combine culture with fun. You can often hire Segways to travel around an ancient city, for example. A morning visiting a museum or gallery can be followed by an afternoon at the beach or shopping – teens seem to like checking out what brands are available wherever they visit and to compare the prices to home. Markets appeal to everyone in the family – you search for a local piece of craft to take home while they wonder if there is any chance that the goods with the logos are genuine.

Staying in different locations on one holiday is a good way to make everyone happy and to stave off teenage boredom. After the week in the Italian villa with friends, we drove south to visit Pompeii and Herculaneum, then on to Lecce in Puglia. Herculaneum is smaller and was more wealthy than Pompeii in its heyday and the teens found it fascinating. They picked out the parts of the unfortunate city that they wanted to explore, starting with the skeletons of 300 people well preserved by the lava, and off they went with a map.

Lecce is one of those great cities where you are immersed in history just by walking around – coffee beside the Roman amphitheatre one morning (it just sat beside us, minding its own ancient business), a stroll through the Piazza del Duomo on the way to dinner (the oldest teen loved some of the individual buildings but hated how the Piazza had developed over centuries so the buildings were very different styles – much to discuss over dinner).

As Lecce is situated in the heel of the boot of Italy, it’s a short drive in either direction to the coast – and you can reach either the Adriatic or the Ionian seas depending on which way you go. Every afternoon we drove to a beach or a clifftop diving area (the coast is very rugged) to join the many Italians looking effortlessly stylish while diving into beautiful emerald pools – the teens fit in much better than we did.

Athens proved very popular when we visited – I think the fact that the Parthenon, for example, is such a familiar building from photos made it really exciting to see in real life.

Providing some context before a visit to a particular place can really improve the experience so try to visit the interpretive centre or museum before visiting the historic site. The Acropolis Museum is a stunning new building with well considered exhibits (including an interactive kids’ section which our young daughter Grace enjoyed) and it really helped to go before we climbed the hill to the buildings.

We watched Gladiator before visiting the Colosseum but that backfired somewhat in that the teens were disappointed that it seemed in much poorer condition that they expected from the movie simulation and they didn’t recognise the arena where the fighting took place as the floor was wooden and has not survived.

The Panathenaic Stadium in Athens fared much better in their rating. Built in the 6th century BC, it was rebuilt in marble in about 100 AD and remains in great condition after a further refurbishment a hundred years ago. The teens had a lot of fun challenging us to races around the track, standing on the Olympic podium and feeling like they were living the history around them.

These are the moments that make travelling with teens wonderful – they are somewhere between being the kids you remember and the adults they will become – but for now, you still get to experience the world with them and through their eyes.

Travelling with teens hints and tips

– Give them a bit of freedom when you can – let them meet you at the restaurant for dinner while you go ahead for a wander around or a pre-dinner drink, or let them shop or explore alone and meet up with you later

– Choosing accommodation provides a chance to let them take control. Give them a budget, some parameters and see what they come up with – they might do a better job than you expect!

Part One: Stress-free trips with babies and toddlers in tow

Back to school: We went into a tailspin when our eldest had a temperature
6