Thessaloniki: All roads lead to the sea in Greece’s second city 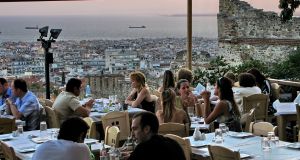 Dinner with a view.

From the Heptapyrgion (Seven Towers) fortress, Thessaloniki spreads out below you, coming to a full stop when it meets the sea. Its setting on the Aegean defines this city, the second largest in Greece, a place where geography is history, a metropolis of the ancient world, a melting pot before the word was invented.

For a start there’s snow-capped Mount Olympus across the Thermaic Gulf, its peak visible, its flanks hidden in mist. Below the fortress, which has been castle and prison under different empires, are the city walls. Built by the Greeks, expanded by the Romans, with Byzantine and Ottoman additions, they stretch all the way down the mountain to reach the sea close to the White Tower, the symbol of Thessaloniki.

Take your time and wander down through the steep streets of Ana Poli, the upper town, passing old ladies in black drinking coffee in traditional coffeehouses, and inhaling the scent of jasmine, and the lessons of history, as you go.

The Vlatodon Monastery’s austere brick and stone exterior shelters a jewel box of restored frescoes. Gold, green and blue predominate, with slim candles piercing the gloom and illuminating the faces of the saints, in what is the only Byzantine monastery left in the city. But its layers go deeper still; on this very spot, it’s said, St Paul preached to the Thessalonians in AD 51.

Sometimes it feels like modern Thessaloniki is overburdened by the weight of history. A metro long in the making has been delayed several times, as more and more monuments have been uncovered, in what archaeologists are calling a “city under a city”. When it’s finished, Thessaloniki’s metro stations will showcase sections of ancient streets, a Roman water feature, priceless mosaics and other stunning finds dating back as far as the 4th century BC.

In the meantime, if you have time for only one museum, make it the Byzantine Museum with its superb storytelling and excellent courtyard restaurant.

Many of the tourists on the streets of Thessaloniki are here to uncover the many layers of their own personal past. At the Rotonda, a Roman building from the 4th century AD, which has also served as church and mosque, I run into a small group singing the Israeli song Eli Eli written by a Jewish woman partisan.

They’ve come to trace the story of the 50,000 Jews of Thessaloniki who were deported to Auschwitz-Birkenau during the German occupation. Once a third of the city’s population, only 700 remain. Down on the seafront a tangled sculpture of bodies and flames acknowledges the Holocaust.

The Irish too, have played a role in Thessaloniki’s past. The 10th division fought along the Salonika Front in the first World War, and some are buried in the city’s Commonwealth cemeteries, including Irish nurse Mary Agnes Doherty.

When the past becomes too much to bear, there’s always food, although as I’m about to find out, it too may end up being served with a side order of history. Sitting at the sharing table at Mia Feta, a dairy and restaurant that showcases the region’s cheese and wine, is deputy mayor Spiros Pengas. The waiter brings us six kinds of feta, including barrel-aged, truffled and smoked varieties, and a glass of local Malagouzia wine.

Pengas was elected on a ticket with mayor Yiannis Boutaris, a tattooed winemaker in his 70s, who began his tenure by apologising for the darkest days in the city’s history, including betraying Jews and embezzling their fortunes. “It brought down stereotypes and taboos. Up to then the narrative had been no one was to blame, it was just bad Germans.”

Like many Greeks here, Pengas has his roots in Asia Minor. In the 1920s a huge transfer of population saw Thessaloniki’s Muslim population forcibly uprooted to Turkey, and Greeks in Turkey moved here.

“I went to visit with my grandfather in the 80s and he met his childhood Turkish friend. It was emotional. My mother asked me to bring back some soil.” Now Turks are making the reverse pilgrimage to get to know their past.

We finish with halva, with a puree of oranges and red berries, and raisins marinated in vinegar, a modern interpretation of a dessert that could be at home in any Jewish, Turkish or Greek kitchen.

This is a youthful vibrant city, home to 150,000 students, who throng the street from early morning til the following dawn

Thessaloniki today is buzzing with new restaurants and food offerings, some inspired by its past, others by its young people who have travelled elsewhere. Mamalouka, with its crisp cool interior, is part of this new wave. This is a youthful vibrant city, home to 150,000 students, who throng the street from early morning til the following dawn. The old neighbourhood of Ladadika crackles with energy, most of it Greeks enjoying a night out. There are tavernas aplenty, but also modern wine bars, rooftop cocktail joints and street lounges perfect for a balmy evening around Morichovou Square and Kapodistrou street.

Near the church of Aghia Sophia, and overlooking the catacombs of Aghios Ioannis, Cin Cin is housed in a beautiful pistachio and cream mansion with a garden terrace. Other places worth a try are the cafe on the roof of the Bey Hamman and brunch on the rooftop of the Electra Palace hotel on Aristotelous Square, overlooking the water.

The waterfront saved the sanity of the city during the crisis

For in Thessaloniki, all roads eventually lead to the sea. After the Great Fire of 1917, the centre was laid out by a French architect with squares and boulevards allowing a cooling breeze to blow through the city in the heat of summer. Take a stroll or ride a bike along the New Waterfront, which stretches for 5km as far as the Concert Hall. Pass Alexander the Great on his horse (the Macedons founded the city), and continue on to the Umbrellas, a modern sculpture and symbol of a city coming in from the rain.

“The waterfront saved the sanity of the city during the crisis,” says my guide Georgios, referring to the Greek debt and political crisis which is still visible in the city’s graffiti and its unemployment rate. “For €3 you could get the bus here and back, have a walk and a coffee, and forget your worries for a while.”

For a few more euro you can pull up a stool at Stou Michou in a corner of the Kapani market (beside an icon shop) and order some spanking fresh sharing plates of fish or vegetables straight from the nearby stalls. Inhale the aroma of fresh spices and herbs, and watch Thessalonians do their daily shopping.

Further afield try out fish restaurant Maiami in Kalamaria where you can dip your toe in the water while dining on meze (order dainty octopus carpaccio, a mussel pilaf, sardines, and tarama), or jump on a waterbus from Dock A or the White Tower to Perea (get off at the second beach stop) where you can sunbathe and swim on a Blue Flag beach, have a fish lunch and be back in town in time for dinner. Thessaloniki is also a springboard for the cliff-top monasteries of Mount Athos, the archaeological site at Vergina, and the beaches of Halkidiki.

End your day at Dock A, where there are photography, cinema and contemporary art centres and where young people come to hang out and watch the sunset. Here I bumped into one of the five Irish people who live in Greece’s second city. Marcus “came for a girl”, and stayed for the people. After only a few days I can see why.

When it gets dark, take a seat on the terrace at Kitchen Bar and look back at the necklace of lights strung along the waterfront. Raise a glass of tsipoura, or something less strong, to the gritty resilience of Thessaloniki and its citizens, who will always have the sea, Mount Olympus on the horizon, and a view to a wider world.

Ryanair flies from Dublin to Thessaloniki on Mondays and Fridays from May until October. The airport is less than 30 minutes from the city.

Antigon Hotel is a comfortable boutique base in the city centre. The hotel restaurant has a glass floor looking down on some of Thessaloniki’s many Roman ruins. Doubles from €139.