Sarajevo: beauty shining through a history of violence

The ‘Jerusalem of Europe’ has endured two world wars and a horrendous civil war. Even so, a generosity of spirit endures among the people 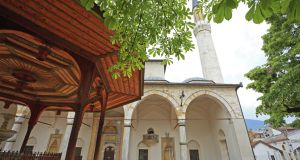 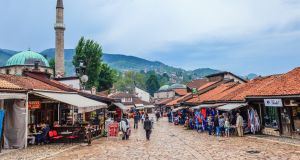 Nestled in a valley on either side of the river Miljacka, Sarajevo isn’t known as the “Jerusalem of Europe” for nothing. In its more harmonious past this was the only European city to have a mosque, Catholic church, Orthodox church and synagogue in the same neighbourhood.

They are still there, cheek by jowl today – the Ashkenazi synagogue; the 16th-century Gazi Husrev-beg Mosque, one of the finest Ottoman buildings in Bosnia; the Catholic Cathedral of Jesus’s Sacred Heart; and Sarajevo’s old Orthodox Church.

Of course, the idyllic vibe has changed utterly since the Siege of Sarajevo, the longest siege on a city in history (April 5th, 1992 to February 29th, 1996), which killed more than 11,500 people. This is hard to forget as I step out for my first stroll through Ferhadija Street towards Sarajevo’s old town. But I try.

First, though, a neat line of baby blue berets files past the window of my hotel – UN peacekeepers. Welcome to Sarajevo. A few steps further, just in front of the Catholic cathedral, a sandwich billboard announces nearby Galerija 11/07/1995’s permanent Srebeniza exhibition. The other side of the sandwich board advertises screenings of Bill Carter’s moving 1995 documentary Miss Sarajevo, which inspired the eponymous U2 song with Luciano Pavarotti. Bono was a regular visitor here around the time of the band’s September 1997 Sarajevo concert.

While I’m here, it must be on every Sarajevan’s mind that Radovan Karadzic, who masterminded the Srebeniza massacre, is about to be sentenced for war crimes at The Hague. It’s hard to believe that a youth hostel has just been named in honour of this notorious “Butcher of Bosnia” in nearby Pale, Republic of Sprska.

In an attempt to look beyond this, and Sarajevo’s history-class reputation as “the powderkeg of Europe”, I wander down Ferhadija Street to Bascarsija (pronounced Bash-Char-She-Yah), the city’s gorgeous old town.

At Sebilj Fountain, a popular meeting place known to tourists as “Pigeon Square”, birds flock as I try to photograph the old electric tram. One of the first in Europe, the tramp shows its age as it crawls past, full of Sarajevans going about their daily business. I take another photograph of the spot where East meets West.

Sarajevo old town is disarmingly charming with its minarets, hookah pipes, and laid-back low seating. Mornings here start beautifully with Bosnian coffee, poured out of copper pots (dzevas), perhaps with a little Bosnian baklava on the side. The people of Sarajevo couldn’t be more warm and welcoming.

How to step lightly in a place so weighed down by heavy history? Perhaps the only solution is to make like a Sarajevan, sitting and socialising with friends (and making new friends) over coffee or some other local tipple. I take their cue to slow down, kick back and get a perspective on how lucky we all that a sniper is not taking aim at us from the surrounding hillsides.

The quaint little streets of Bascarsija are organised as if according to medieval craftworkers’ guilds. So, “Coppersmith Street” (Kazandziluk Street), is filled with beautiful copper goods. Next to those traditional Bosnian coffee pots are polished bullets, bullet-pens, and fighter jets made of bullets, proudly on offer as souvenirs.

There is also a street of goldsmiths, or zlatari, reminding me of Sarajevo-born Dubliner Zlata Filipovic, a film producer and author of international bestseller Zlata’s Diary: A Child’s Life in Wartime Sarajevo, who escaped to Dublin during the siege.

For something really special, check out the traditional jewellery modelled on items from the National Museum of Bosnia and Herzegovina in “Zlatar Sofic” (zlatarsofic. com). Fashions in these market stalls are increasingly Turkish rather than Bosnian, and more young women are covering up in burkas and veils than ever.

On good advice, I take a drink of water from the public fountain outside Bey’s Mosque (the first mosque in the world to have electricity), which, according to legend, ensures that I will be back here again. I hope I will.

Sarajevo, with its population of about 400,000 is small, making it easy to navigate and to quickly feel at home. Just wandering around you will inevitably wind up at the spot we all learned about in school, where the assassination of Archduke Franz Ferdinand sparked the first World War.

Here, at the picturesque Latin Bridge (known as Prinzip Bridge during Tito’s time), the Sarajevo Museum 1878-1918 immortalises the flukey sequence of events that led to Gavril Prinzip’s shot at the Archduke of Austria and his pregnant wife when their royal carriage unexpectedly stalled and reversed. Take selfie here.

I re-read the Sarajevo section in Rebecca West’s 1941 travel tome Black Lamb and Grey Falcon, on the three flights I took from Dublin to Sarajevo. (West, whose father was an Anglo-Irish aristocrat from Kerry goes over the assassination).

There is a time-warp feeling to Sarajevo. If Prinzip were to return today, little would have changed (trams included), in the quaint Hapsburg Empire streets since he navigated them in 1914 to take his three world-changing shots.

My favourite spot, though, is further down river. The wonderful 2012 Festina Lente Bridge, whose name translates to “make haste slowly”, leads in a leisurely fashion to Sarajevo’s majestic Fine Art Academy. It loops in an architectural invitation to slow down and smell the roses – or, in this case, to savour the ancient Miljacka river view.

This is the laid-back vibe that permeates this charming if volatile town. Melancholic it may be, but being surrounded by so many reminders of death and destruction, with graveyards in every available green space, one cannot but breathe in deeply and feel lucky to be alive at all.

Sarajevo is a strangely beautiful, and very emotional place to visit.

Buy yourself a dream... with the planning headaches sorted
5