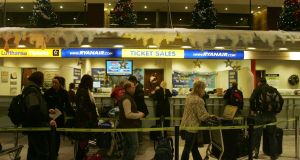 Just under 33 million passengers passed through Dublin Airport last year setting a new record for traffic at the airport.

All told around 30.7 million people started and ended their journey at Dublin Airport last year while almost 2.2 million passengers used it as a hub.

Passenger numbers were up 4 per cent in 2019 when compared with the previous year as a stronger first half performance gave way to more modest growth in the later part of the year.

Dublin Airport is now the fifth largest airport in Europe for transatlantic connectivity with the growth underpinned by the increasing numbers of connecting passengers who fly through Dublin.

UK traffic increased by 1 per cent, with almost 10.2 million passengers travelling to and from UK airports last year. Traffic to London performed better than services to UK regional destinations, which has been a pattern in recent years.

There were 25 new routes at Dublin Airport last year – including new long-haul services to Calgary, Dallas-Fort-Worth and Minneapolis-St Paul and new short-haul services to Bodrum, Kyiv, Lourdes and Thessaloniki.

Dublin Airport has flights to more than 190 destinations in 42 countries operated by almost 50 airlines. It is the tenth largest airport in the European Union.

Rock’n’wool: Irish knits come in from the cold
6