It is a straight road from Dublin to Cork. With two kids, what could go wrong? 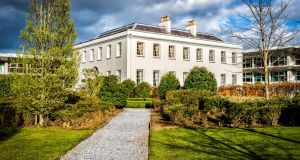 The Radisson Blu Hotel and Spa on Little Island, just outside Cork city. It is exactly the kind of place you want to alight after such a rough journey

Our plan was simple. We would pack the night before. We would leave by 10.30am, 11am at the latest. The engine would be checked, the tyres kicked. A picnic packed for the half-way pit-stop. It is basically a straight road from Dublin to Cork, what could go wrong?

As we flung our hastily packed bags (how did we have so many bags?) into the boot, we might as well have been throwing our best-laid plans into the bin. A sleepless night worked its domino effect like a wrecking-ball through the morning. There was more than one tantrum. The kids were fine, though.

We may have been frazzled and late, but we were on the road. Here is the truth of travelling with a one year old and a three year old: you plan for the worst and hope for the best. Holidays are great; getting there is hell. So when they both fell asleep within 10 minutes we felt the stars had aligned. It was a short-lived dream. Two hours later, as the first flecks of car-sickness vomit spluttered from our one year old’s screaming mouth, we knew our goose was cooked. Sitting on a dangerous hard shoulder trying to comfort two miserable children in the rain, you really have to ask yourself: is it worth it?

We were staying in the Radisson Blu Hotel and Spa on Little Island, just outside Cork city. It is exactly the kind of place you want to alight after such a rough journey. Trudging through the doors three hours after our intended arrival time, we were greeted with such professional hospitality that memories of the drive began to instantly evaporate. Combining the 18th-century Ditchley House, a beautifully restored country manor, and two contemporary wings, it is a little haven of calm in an unlikely spot (more on that later).

A family-focused hotel, it concentrates on the details and gets them all right. So while some hotels offering child-friendly atmospheres can feel like particularly raucous daycare centres, this place has realised what every parent already knows: it is all a careful balancing act.

The biggest challenge eating out with young kids is the timing. They have no concept of ordering and waiting for food. A menu is a complete abstraction to them. They don’t know what they want, but they want it now. Maestro’s Restaurant has taken a small, yet rather clever step to counteract this. Rather than ordering from their own menu, kids can walk up to a buffet-style counter and see all the food laid out before them. No muss, no fuss. The adult menu is a mainly surf-and-turf affair, with a thoughtful wine list. You can tell a lot about a restaurant by how well they cook their steaks. We ordered the rib-eye and the sirloin; both were superb.

With nine treatment rooms, sauna, steam room and relaxation suites, the newly refurbished spa is a luxurious parent-charging station. Here the details make the difference, too, from the effective mood lighting to the herringbone parquet floors.

What makes the spa and restaurant really great, though, is how they work in tandem with other services on offer. Professional on-call babysitters coupled with the Blu Birds Kids Club means that parents don’t have to take turns treating themselves. They can (whisper it) actually enjoy some quality time together.

That time won’t be spent on romantic walks through the hotel’s grounds, however. The surrounding landscape is, to put it kindly, on the industrial side. To be fair, that isn’t why people choose this hotel. They choose it first and foremost for its proximity to other attractions, most notably Fota Island and Cork city, both 10-15 minutes away by car.

People always talk up west Cork, but the eastern half of the county has plenty to offer, too. Cobh (visitcobh.com), with its impossibly steep streets, stunning St Coleman’s Cathedral and Titanic Experience, is well worth a visit. And an afternoon spent in Ballymaloe Cookery School and Organic Farm (ballymaloe.com) is always an afternoon well-spent. Just half an hour from the hotel, it is set on 100 acres of farmland, with beautiful gardens and nature walks (including a kids trail), and incredible gourmet pizzas on weekends.

Closer to Cork city, overlooking the river Lee estuary, sits Blackrock Castle Observatory (bco.ie/). With plenty of daily tours, kids will get a kick out of exploring the dungeon, hearing about smugglers and pirates, firing the cannon and learning about the universe in the planetarium. They’ll even get to send a message to space and track its navigation.

We left this little corner of Ireland relaxed and reinvigorated; a state of mind almost unheard of in the realm of family holidays. The icing on the cake was the knowledge the return journey couldn’t possibly be as bad as the drive down. We have never been more wrong in our lives. But was it worth it? Absolutely.

A family stay with two connected rooms in the Radisson Blu Hotel and Spa costs €350.50 for one night, with breakfast. radcork.com

No parent wants to be a killjoy, but it’s time party bags were banned
9