There is an emphasis in the Canadian city on ‘clean’n’green’ fare produced ethically, sustainably and locally 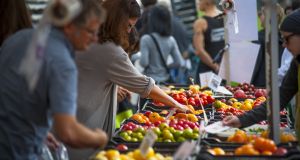 Exploring fresh produce at a local farmers market in Vancouver

I’m peering down at the receding water minutes after boarding the bobbing Otter floatplane run by Harbour Air Seaplanes. And then we’re up and away, leaving behind Vancouver port’s awkward-elbowed cranes and flying between the jagged downtown skyline and the North Shore Mountains.

Out we go, over the all-weather yacht docks at Coal Harbour marina, past the 400-hectare rainforest that shrouds Stanley Park like a great green speech bubble at the mouth of Vancouver Harbour, and into the big blue of the Burrard Inlet, before swinging south past a cluster of Gulf Islands to the great buffer of Pacific Rim wilderness that is Vancouver Island.

It’s impossible to spend any time in or around Vancouver, Canada, without being awed by the backdrop of nature in which this Pacific Northwest city nestles. Even right downtown – at the Robson Square skating rink, perhaps – you’re a 20-minute stroll from Beach Avenue and the closest of nine city beaches that make sea-swimming, sunbathing, volleyball, kayaking and picnicking the most natural ways to unwind for Vancouverites.

Unless, of course they’ve headed into the wilds of Grouse Mountain for a morning of hiking, skiing or snow-boarding, which – at just a 30-minute public transit ride away – they’re justifiably fond of doing.

Don’t be surprised to see locals turn up for dinner looking like they’ve come straight from a beach, mountain, yoga mat and/or Seawall run. They probably have.

That love of nature’s bounty translates into their food choices too: one hot trend in the thriving gastro-scene of Vancouver city and surrounds is an emphasis on “clean’n’green” fare, produced ethically, sustainably and locally.

Even in the high glamour of Hawksworth Restaurant in the Rosewood Hotel Georgia, a down-to-earth sense of place informs the BC Journey Menu. Chef de cuisine Quinton Bennett describes the menu as highlighting “heritage, tradition and biodiversity, demonstrating just how much fresh and varied produce BC (British Columbia) has to offer”.

My meal opens with Gulf Island shellfish: Salt Spring Island crab dusted with sour cream snow, and paired with quince from Okanagan Valley, as famed for its orchards as for its vineyards; then naturally smoky Quadra Island honey mussels atop apple caviar, draped with celeriac chiffonade.

Game meat follows from west Canada. Fraser Valley rabbit hails from a small family farm east of greater Vancouver, in fertile floodplains inhabited during the Gold Rush. Bison from Peace river prairies beyond the Canadian Rockies is fragranced with pine oil and blueberries foraged from Vancouver Island, and rooted with earthy parsnip in honour of the First Nations folk who relished those flavour pairings.

It’s not just high-end restaurants that are committing to high quality, low impact local produce. One Sunday I join the flocks of North Van fans of ethically raised, hormone- and antibiotic-free meat who are heading straight to the source.

After 10 years supplying Vancouver’s top chefs, Two Rivers Meat has transformed a roomy warehouse into a butcher shop and family-style eatery that is fast becoming a mecca for Vancouver’s natural meat-lovers. Their in-house charcuterie is worth the Seabus crossing alone, never mind those dry-aged speciality cuts crafted by masters of seam butchery and grilled by skilled chefs, who work in the glassed-off hanging room and at the open birch-fuelled grill.

This meat also appears on the menus of chef Andrea Carlson, who heads up the seasonal farm-to-table restaurant that is Burdock & Co on Main Street (Vancouver’s answer to East London cool), and the ramen-cafe-meets-urban-grocer that is Harvest Community Foods near Chinatown.

You can tuck into a steaming bowl of ramen knowing this antibiotic-free pork comes from farms vetted by the Two Rivers team. Regulars keep room for the local Earnest Ice-Cream (Whiskey Hazelnut, perhaps) available at Harvest, which also acts as a hub for community agriculture and fishery projects.

Carlson has cooked in several influential restaurants in Vancouver’s sustainable scene. She was part of the team at C Restaurant in 2005 when it became the founding partner for Vancouver Aquarium’s Oceanwise programme. The Oceanwise logo has become a familiar sight on menus across Canada, with 700 partnering businesses – including a growing number of Vancouver’s world-class sushi restaurants – helping diners make sustainable seafood choices.

Carlson’s epiphany about the flavour potential of plants came while working on Vancouver Island. “The quality of the produce from the growers in East Sooke was phenomenal,” she says, reminiscing about a raw turnip that was “the best thing that I ever tasted”.

Set within three acres of herb and edible blossom gardens, the Sooke Harbour House kitchen eschews imported items like lemons for local botanical substitutes. “Acidity might come from edible tuberous begonia blossoms, and lemon notes from a type of bayleaf or rosemary.”

My own trip to Vancouver Island takes me a half-hour north of Victoria along the glorious Malahat Drive to Cowichan Valley, which translates from the native language as “the warm land”. Its status as Canada’s warmest place explains the 800-plus farms in the area, not to mention wineries, cideries and hop-growing breweries.

Visitors can take a self-guided tour of the property before relaxing over a hearty lunch: think cider-leavened sourdough, local Haltwhistle raw goat cheese, cider-braised beef and orchard-grown morels and chanterelles, washed down with Merridale cider or a craft spirit cocktail. Come for their weekly Sunday pizza nights and you can stay in one of the onsite yurts.

The nearby village of Cowichan Bay was the first North American community to adopt the Cittaslow ethos, thanks to the leadership of Bruce Stewart of True Grain. Cittaslow is a place-based offshoot of Slow Food that encourages local policy-makers to create environmentally sustainable communities that are walkable and hospitable, and that celebrate their history and their craft producers.

As Stewart talks me through the zero-waste practices of his heritage grain bakery, our conversation is punctuated by the barks of Stellar sea lions, gathered to compete with bald eagles for a feast of Pacific salmon en route to spawning sites at nearby Goldstream Park.

Their cheerful racket is a reminder of just how interdependent the natural world is, and of what is at stake if we don’t adjust our food systems, and fast.

This urgency is recognised in Vancouver’s ambitious plans to become the world’s greenest city by 2020, a goal necessitated by an uncomfortable truth. Before the end of this century large tracts of this spectacular coastal and estuary-fringed city and its neighbouring archipelago of islands will have disappeared under rising sea levels.

The unknown is how fast those waters will rise, and how well the community can adapt to the new reality.

It’s a thought that makes me grateful for the fully carbon-neutral status introduced by Harbour Air Seaplanes a decade ago, the first North American airline to do so. After all, it’s not just our food systems that will need overhauling in the challenging decades ahead.

Sustainability is no mere trend. It’s an ambitious imperative. A visit to Vancouver is a reminder of both the scale of that challenge, and the communities that are rising to meet it.

The most direct flights from Dublin to Vancouver are via Reykjavík with IcelandAir (from €384 one way). Aer Lingus flies to Toronto or Seattle (and enjoy a spectacular four-hour coastal train ride) while British Airways (from £477 return) and AirCanada (from CAD$949 return) fly via Heathrow.