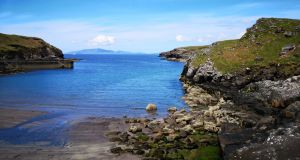 Slieveagh, Cahersiveen, Co Kerry is a perfect spot for a short and impressive walk

For those intimidated by the many formidable peaks that fringe the Ring of Kerry, there is a nice little hill, Slieveagh, just outside Cahersiveen that provides big mountain views with very little effort; in fact, an ideal afternoon or evening walk far from the tourist crowds.

As it is such a short walk, I decided to start from Cooncrome Harbour and make a “sea to summit” walk out of it; a particular penchant of mine.

It is a splendid walk up a narrow country road with impressive views of the cliffs at Cooncrome and the intricate sea roads of this part of Kerry. A tall impressive ruin dominates the end of the road. This is the remains of the Slieveagh Peat Works, which was opened in 1851 and employed 600. The mill made compressed peat by the use of steam and would have been similar to the modern peat briquettes. Surrounded by Silver Birch, it is a striking and unique sight.

It marks the start of the Kimego Loop Walk. The main attraction for me is that a short distance up the forest road, a spur track leads out on to Slieveagh, which provides a superb panorama of Dingle Bay bounded on the north by a view of the peninsula running all the way from the gleaming sands of Inch Beach to the outermost of the Blasket Islands.

I strolled down to the edge of the cliffs to look into what could possibly be the largest blow-hole in the country. To my knowledge it is the only one large enough to appear on an Ordnance Survey Map. I contoured further along the cliffs until I reached the bottom of the spur that leads back up on to Slieveagh, where I settled down to watch the setting sun.

Because of its proximity to the forest track, the summit of Slieveagh is an ideal spot to watch the sunset over the Blaskets in summer and over the western horizon in spring and autumn. Roadside view spots never have the same atmosphere as a silent solitary viewpoint. People often miss the best part of a sunset as they rush off the minute the sun disappears below the horizon; it is in the half an hour or so after that the most spectacular effects are observed if the rays send up spectacular golden flares and an array of hues under-lighting thin cirrus cloud.

A full moon can add to the ambiance as the darkening sea is bisected by a burnished highway of silver. The loom from the lighthouses of Tiaracht, Skellig Micheal and The Bull add to the magic. Here on the west coast the extra half-hour of nautical twilight allows for a safe descent back to the road – but be sure to have a good torch in case the moon slips behind a cloud.

Walking back down the road you are slowly drawn back into human society as pinpricks of light spring up all over the darkened land below you.

Start and finish: Large car park at Coomcrone Harbour. Grid Reference: 445 816. You can also park at start of the Loop Walk at the top of the road.

How to get there: Cahersiveen is on the N70. Cross over Cahersiveen Bridge and turn left at the cross roads.Coomcrone is signposted about 3Km along the road.

Brú na Dromada Hostel near Waterville is top quality and designed for walkers, hikers and cyclists.