‘If they’ve made it, they’ll eat it’: Smart ways to get kids cooking – and eating less fussily 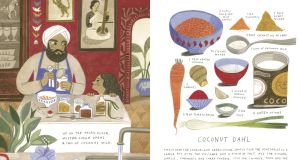 The little people in my house have limited interest in cooking and even less in experimenting with food. What they love, however, is books, and Felicita Sala’s new picture recipe book, Lunch at 10 Pomegranate Street, has been inspirational, allowing us to add several surprising new dishes to our weekly menu.

The format offers an imaginative starting point for exploring a variety of ethnic cuisines. It is set in a rambling five-storey house on the fictional Pomegranate Street, a hive of diversity in an unnamed European city. Here, a multicultural cast of residents cook up a variety of meals from diverse traditions, as Sala brings us on a tour through the various apartments.

Sala, who was born in Italy, raised in Australia, and now lives in Rome, was inspired by her experience of Italian food culture. “There isn’t really much of a culture of international cuisine here,” she says, “certainly compared to Australia, so I was really interested in exploring different influences, especially because I have a young daughter. I want her to be exposed to as wide a variety of flavours and foods as possible.”

This a picture-book first and a cookbook second. “There are a lot of children’s cookbooks which want to help children learn how to cook or try new foods,” she explains. “I was more interested in giving kids a peek inside the homes of different people; that they would see that different people from different places might eat different foods.”

So, we meet Mister Ibrahim stirring tahini for baba ganoush as “he remembers his childhood home”; twin sisters Jemima and Rosie mixing the batter for banana and blueberry bread; and Mister Melville getting ready to fillet a fish for sole meuniére. There are 16 recipes featuring foods as exotic as Salmorejo, and as familiar as peanut butter cookies. The book ends with all the residents of No 10 convening in the garden for a wonderful feast.

The ingredients for each recipe are finely rendered in coloured pencil and watercolour, set opposite the interior of each stylish kitchen – spot the colanders and ladles hanging on the walls, the cast-iron pots simmering on the stoves.

Sala was careful not to be too specific in her multicultural representations. “I didn’t want to play too much to stereotype,” she says. “Firstly, because many of the dishes belong to many places, but also because each child will have a different reality of multiculturalism. Some kids will love seeing a dish that their parents might cook, but some won’t care where the different characters come from.”

Attracted first by the eye-catching cover, my kids were excited to see inside the different rooms of Pomegranate Street. They wanted to cook and taste every recipe, so we could have Lunch on 10 Pomegranate Street in our own house. Miraculously, they followed through – strawberry crumble and oyako don being the biggest hits – though they still refuse to believe that aubergines are for eating.

As Sala says, “cooking together in the kitchen is such an important way of getting kids to try things. If the kids have made something themselves they are more likely to try it, and they are much more likely to give it a yes.”

Lunch at 10 Pomegranate Street is published by Scribe UK