The Galway castle that's the most-visited Airbnb in Europe 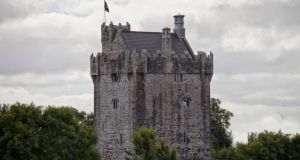 Cahercastle in Co Galway has been standing since the late 1400s. Photograph: Airbnb

A small castle in Galway which is more than 600 years old has become the most visited Airbnb in Europe, according to the wildly popular accommodation booking engine.

While Cahercastle just outside Craughwell is only the second-most booked European listing on the platform, behind a bedroom in Bruges, more guests have stayed there, making it number one in the popularity stakes.

Peter Hayes runs the castle, which is a 30-minute drive from Galway City, with his partner Eva. He introduces himself to would-be bookers by saying “one needs to be somewhat crazy to be owned by a castle, it’s owned me now for 20 years... It is our home, it’s not perfect, so don’t expect perfection, we do have cobwebs and a little dust (so asthma sufferers take note). We endeavour to make your stay as comfortable as possible.”

Whatever Peter and Eva are doing, they are doing it right, as they have become Airbnb Super Hosts, a title only given to those who get almost universally positive reviews from their guests.

The reviews for the single room in the castle, which costs around €150 a night, can only be described as rave. “The most unique B&B we’ve ever stayed- most recommended,” is how one recent guest started their assessment of the castle.

“This is an amazing opportunity to stay in a castle that has been lovingly restored by one man’s passion and determination - Pete is a great character with so many fabulous tales to tell,” says another Airbnb user.

“What an experience! The location was beautiful, the accommodation was just uniquely brilliant! Pete and Eva were absolutely lovely, very friendly, chatty, and informative,” is someone else’s perspective.

“Pete’s Castle is just amazing. It far exceeds your expectations and leaves you wanting to stay longer. The castle has been a true labour of love for him as is obvious from the all the hard manual work he has put in. From the laying of the turrets to the handmade wood bed frame. He was a wonderful host and very informative both about the castle itself and the surrounding area,” gushes a fourth review.

The praise goes on and on and on.

Airbnb confirmed the popularity of the Craughwell Castle as part of an announcement which it said was “its biggest milestone yet”: over the last 11 years, half a billion guests have stayed in an Airbnb somewhere in the world.

Since the first three guests stayed with company founders Brian Chesky and Joe Gebbia in San Francisco in 2008, Airbnb’s accommodation offering has spread like wildfire across the world. Now, six guests check-in an Airbnb somewhere on the planet every single second.

They check into one of more than six million listings in 191 countries and 81,000 cities worldwide. That is more listings than the six largest hotel groups have rooms combined.

Europe remains the most popular continent, accounting for 45 per cent of all-time guest arrivals - more than North America and Asia combined. On any given night, almost 750,000 guests stay in a listing across Europe.

Airbnb’s biggest night in Europe was on August 11th 2018 when 1.9 million guests stayed in an Airbnb.

“This milestone is a testament to the revolutionary people-power of the Airbnb community,” said Aisling Hassell, head of Airbnb in Ireland and global vice president. “Hosts are continuing to transform the hospitality sector, offering guests authentic experiences in local communities and helping to create meaningful memories. This is an incredible achievement by hosts and guests in Ireland and across the world.”

As always, Airbnb has been keen to stress how it helps spread the economic benefits of tourism, and it also announced that hosts on the platform have earned over $65 billion, “providing economic empowerment to millions of families and hospitality entrepreneurs, while boosting local communities and small business in neighbourhoods around the world”.

Things could soon get trickier for the platform in this part of the world. Last October, the Government rolled out measures aimed at tightening the rules around short-term lettings, in a bid to boost housing supply. From June 1st, hosts of entire properties will need to seek planning permission to let their properties for three months or more in a year.