Voters described the Carrickfinn airstrip as ‘spectacular’ and ‘beautiful’

The landing strip at Co Donegal's regional airport in Carrickfinn has been voted 2019's most scenic in the world. It also won the award in 2018. Video: Owen Clarke Photography 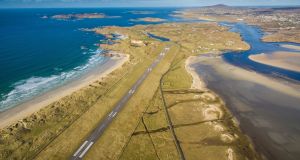 Donegal Airport has been named the most scenic in the world for the second year in a row.

The airstrip at Carrickfinn finished ahead of Barra Airport in Scotland in second place, with Nice airport coming third in the annual poll carried out PrivateFly, a private jet booking service. The airport finished second in 2017 and seventh in 2016.

Voters pointed to its scenic surroundings and dramatic approach. “The view is spectacular! Mountains on one side and a beautiful rugged coastline dotted with islands and golden sandy beaches running adjacent to the runway,” said one voter, while another said it was the “most beautiful scenery I ever saw, with the beach on one side with crystal clear water and Mount Errigal standing tall on the other side”.

The airport thanked people who voted. “Management and staff are delighted to have Donegal Airport as the No.1 most scenic airport for the second year. A big thank you to everyone who took the time to vote for Donegal Airport,” it said in a tweet.

Just two routes operate out of the airport: Stobart Air runs the Dublin-Donegal route, while Loganair flies to Glasgow.

Stobart said “this achievement is a great boost for Co Donegal and for the airport and is testament to the attractiveness of the county as a destination to visit.”

The poll of thousands of voters across the world ranked 129 airports, which was overseen by a panel of industry experts , PrivateFly says.

Donegal is in the habit of winning awards – Harvey’s Point won TripAdvisor’s Travellers’ Choice Award for hotels earlier this year, while National Geographic Traveller voted the county the “coolest place in the world” to visit in 2017.