A cliff walk more awesome than Cliffs of Moher hike

Walk for the Weekend: See ancient churches and sea stacks from the Clare coastline on the Cliff Walk at Kilkee 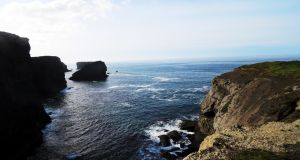 Views across the Atlantic from Kilkee Cliff Walk

I’ve never been overwhelmed by the Cliffs of Moher. The sea is too far beneath and being close to the interaction between sea and shore is what makes a cliff walk so invigorating.

I was saying this to someone recently and he advised me to try the Cliff Walk in Kilkee. So off I went... and I was wowed.

These lower cliffs gives one a clearer view of the patterns created as the waves surge into their serrations and up their lower slopes until the back wash reverses the process to create new forms in the tumbling waters and curving lines of foam.

The rock strata are also in your line of sight on the many indentations in the rock face. Unlike the cliffs further north, which are horizontal, here they slope at differing angles creating further interest.

The walk starts on a tarmac path leading up towards the high point of the cliffs. The first feature of interest are the Diamond rocks, so named because of the many intrusions of veins of White Quartz which glitter in sunshine.

Upwards to Knockroe Point the subtle differences in hue in the rock layers were highlighted in the autumn sunlight which had begun its slow descent to the horizon.

The Point marks the northern end of the intriguingly named Intrinsic Bay, so named after a ship of that name which was wrecked there in 1836. the entrance on the far side of the bay is marked by the first of the many sea stacks that stand proud of the precipices of which they were once a part.

The tarmac track ends where it meets the road network, but it is possible to continue along the grassy clifftop as is evidenced by the trails, which indicate that many continue their exploration of this mesmerising area.

Coming to Foonagh Point, there is a good view out to Bishops Island, a large sea-stack, 180m x 90m and 40m high, on which there stands the remains of a tiny church built in the corbelled style of Gallarus Oratory in Dingle.

In 1839, Eugene O’Curry of the Ordnance Survey wrote that “those of neighbouring landsmen, as have nerve enough, use it for grazing, presumably by hoisting their sheep up the cliffs on ropes”. This surely an indication of the need to use every patch of land along the overpopulated western seaboard at that time.

Further on it is safer to take to the road that stays close to the cliff edge as far as Castle Point, a popular point for fishing for those who have the nerve to stand on the edge of the 50m cliffs and throw their lines from long sea rods. Two Polish men were doing just that when I arrived.

I shortly came to a junction with a road that leads back to Kilkee, but returning along my outward route was the obvious choice. By now it was twilight and the dark outlines of the sea stacks added an enigmatic aura to the seascape in the gathering gloom, an appropriate ending to a late autumnal walk.

Kilkee Cliff Walk, Co Clare
Map: Ordnance Survey, Discovery Series, Sheet 63
Start/finish: The car park at the western end of the coast road in Kilkee. of Kilkee.
Grid Reference: 874 602
How to get there: Kilkee is on the N67; the southernmost town on the west Clare coast.
Time: Three hours
Distance: 10km
Ascent: 350m
Suitability: Easy