I’ve spent every summer on the Kerry beach since 1973. Now I’m bringing my son back, to teach him how to swim 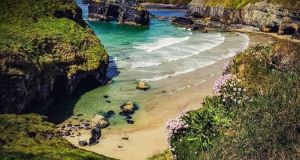 Several hundred families drawn from Kerry, Limerick and Cork intermingle on the sand when the sun shines in Ballybunion. Photograph: Mark Durkan

My Australian wife isn’t a fan of beaches or hot weather. She loves living in Ireland, where sun and sand rarely interfere with her love of books, rain and the indoors. But she married someone who would happily spend his every waking moment on a beach. I blame my beach obsession on Ballybunion, the north Kerry town where I have happily spent time every summer since 1973.

One Easter, I managed to drag Christine to Ballybunion’s Ladies’ Beach, which she was uncharacteristically reluctant to leave. Distracted by the stunning views of Loop Head and Mount Brandon, I hadn’t realised that Dominic West, the handsome actor from The Wire and The Affair, was playing football with his children (his wife grew up in nearby Glin Castle, Co Limerick). Ballybunion is full of surprises.

My parents adore Ballybunion: it’s where my mother first saw the sea at the age of five, and many decades later, they still spend most sunny days on the beach doing the crossword and reading the paper with a flask of tea and a coolbox full of sandwiches.

It’s where my father taught me to swim. I can’t remember much imparting of technique; he had total trust that the skill would come to me intuitively if he simply dropped me in to the deep water. And he was right.

When I began to travel further afield in my 20s, the charms of Ballybunion seemed to pale as Bali and Fiji beckoned. But now, after seeing so much of the world, the town has called me back, now with my own young son to teach how to swim.

Ballybunion has changed since my youth: the nightclubs, roller discos and multiple chippers are giving way to to surf schools, outdoor yoga and take-away flat whites. My friend Kathy spent her childhood summers there too, “the scene of all my first crimes”, as she likes to describe it. Hopefully it’s still that kind of place if you’re 16. Irish beach towns offer a certain freedom, the rules aren’t quite the same.

I love that Ballybunion has held on to its edge - and its slot machines - while also catering for those of us who take our coffee a little too seriously.

Take me to the beach

The Ladies’ Beach is Ireland’s ninth most popular beach on Tripadvisor. Sandwiched between a cliff at one end and the town’s iconic castle on the other, it’s easy to understand why this strip of sand has a special place in many people’s hearts.

Back in less liberal times, the local priest would patrol the beaches, enforcing the strict segregation of the sexes between the Men’s Beach and the Ladies’ Beach; even the poor nuns were regulated to their own beach at a safe remove on the other side of the cliffs.

Nowadays several hundred families drawn from Kerry, Limerick and Cork intermingle on the sand when the sun shines. “The beach was black,” is how my mother would describe the scene.

If life is getting me down, a day spent here restores my mood instantly: everybody is happy, fathers play hurling with their daughters, gangs of teenage boys poke fun at each others six-packs (or lack-of), and stoic, 70-something women in swim caps pick their way through the crowd after their daily dip in the Atlantic.

Ballybunion does amazing sunsets; I like to walk the total 3.2km length of the beaches by myself at dusk when the light is pink. If the weather isn’t co-operating and the beach is off limits, I finish the day instead in the hot-tub at the town’s leisure centre.

Ballybunion was never short of fast food options, but I knew things were changing last summer when I came across a kiosk on the Castle Green serving homemade waffles and carefully sourced filter coffee. Seaside Ballybunion is run by Julia and Seb, surfers who traded in their lives in Germany to live by the sea in Ireland. Further up the main street there’s even a chocolatier, Gourmandises Time, where French woman Veronica Auvert makes her own cola flavoured marshmallows and raspberry and pistachio cheesecake. The tiny Thorobread Bakery sells the best chocolate croissants I’ve had outside of France.

The cliff walk above Ladies’ Beach is breathtaking, though not for those afraid of heights or edges. As a child I was terrified of falling into the Nine Daughters’ Hole, named following the fate of the local girls whose plan to disobey their father and run off with a bunch of Vikings came to a swift and brutal end. In the evenings, the coves fill with thousands of starlings preparing to bed down for the night.

The path leads to the Virgin Rock, the aptly named sea arch overlooking the Nuns’ Beach. Eco Trek provide guided geology walks of the area (ecotrekballybunion.com). Bromore Cliffs is another stunning walk nearby on private land (€5 per car, bromorecliffs.com). Several kilometres to the south on Kerry Head set your Google map for Meenogahane Pier for cliff jumping off the Horricles sea arch. Escorted wild swimming tours are available with John Edwards (wildwateradventures.ie).

Ballybunion is one of the best beaches in Ireland for beginner surfers, or for slow learners like me who are still in that category 20 years after I first stood on a surfboard. The waves are mercifully small and constant, with relatively few surfers competing for them by comparison with Ireland’s better-known surf spots. I picked up a foam board last summer and now my son has already eclipsed his ageing father in the difficult art of wave riding. I’m too stubborn and single-minded for lessons, but the teachers at Ballybunion Surf School are reputedly brilliant, and one of these days I’ll sign my son up for one of their four-day surf camps (ballybunionsurf.com).

I still do a double take every Sunday morning when I pass a yoga class (facebook.com/cheyogakerry) on Rinn Bhuí Green overlooking the Men’s Beach. This field used to be a pitch and putt club in the 1980s - how things change. Thankfully, Collins’s Seaweed Baths on the Ladies’ Beach is still exactly as it was. The Collins family has been filling cast iron tubs with warmed seawater and locally harvested seaweed for more than 90 years. It’s the best €24 you will spend in Ballybunion. Afterwards, run straight in for a swim to shock your circulation back into action (068 27469).

I love most seafood, but I’ve never been able to stomach periwinkles, a local delicacy in Ballybunion. A car parked on the main street sells them out its rolled-down window, along with bags of dried seagrass. If you’re feeling adventurous, you can pick them yourself from the Perriwinkle Rock on the Men’s Beach.

Fishermen in currachs lift salmon from the Cashen River at the far end of the town. I remember my parents buying wild Atlantic salmon directly on the beach. Book a table upstairs at Daroka for a sea view and menu brimming with fish and seafood. The Marine does great fish and chips, best eaten at their outside tables with views across to Clare.

A room with a view

The Cliff House Hotel has rooms with balconies overlooking the Ladies’ Beach (cliffhousehotel.com). I’m a sucker for their sister hotel, the Listowel Arms (listowelarms.com), 10km inland. The recently opened boutique hotel, Wilde Ballybunion, also offers rooms with sea views (wildeballybunion.com). Bear Cottage available on Airbnb overlooks the mouth of the Shannon Estuary. Alternatively you could stay in a little wooden pod at Glenwood Studio in nearby Littor Strand (podsireland.com).

A statue of Bill Clinton swinging a golf club greets you as you arrive in Ballybunion. The former US president visited in 1998 to play at the world famous golf course. The author Maeve Binchy was also a fan of the town (if not the golf course), and her second novel Echoes is based on a fictionalised version of Ballybunion.

The town still enjoys a loyal following with the same families returning year after year for their summer break at the beach. Ballybunion was left a little in the shade once cheap sun holidays became popular from the 1980s onwards, but it has been a joy to watch the town come into its own again in recent years, with a roster of imaginative events and an array of new businesses breathing new life into one of Ireland’s most beautiful stretches of coast.

How to make the most of your natural brows and lashes