Former Etto, Chapter One and Thornton’s staff to open new restaurant in Howth

Food File: Fish will be the focus of a modern Dublin menu in Mamó 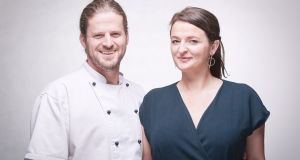 Killian Durkin and Jess D’Arcy are due to open Mamó in Howth in August.

Something fishy in Howth

It’s always exciting when some of the country’s best restaurants spawn others, so anticipation is high for ex-Etto staff member Jess D’Arcy and ex-Chapter One and Thornton’s chef Killian Durkin’s first restaurant in Howth.

Mamó, due to open in August, is described as “a contemporary European dining experience in a relaxed and friendly setting”, highlighting north Co Dublin’s abundant produce in a modern way, alongside a dynamic wine list.

The couple met 10 years ago while working in The Mermaid Café, and have lived and worked in the city centre for the past 15 years, but wanted to strike more of a work-life balance, so when the premises came up on Harbour Road in Howth, they jumped at the chance to be by the sea. Fish will be important, with rollmops, clams and carpaccio featuring on the opening menu, as well as locally foraged foods and pasta.

Another seaside town getting a new place to eat is Dún Laoghaire, as seafood- and steak-focused brasserie Casper & Giumbinis will open in the next few weeks. It’s the second restaurant from siblings Kim and David O’Driscoll, owners of DeVille’s bistro in Dalkey, and the name pays homage to their father’s cocktail bar and restaurant of the same name. The original Casper & Giumbinis was on Wicklow Street in the ’80s and ’90s, and was famous for having a rotary dial telephone on each table that could call any other table or the barman to ask for a drink. Flirtation pre-Tinder.

Sligo’s continuing to cement its status as an Irish food destination. A number of the town’s restaurants and cafés already take part in the Sligo Food Trail, allowing visitors to sample local food and drink, and on Monday August 5th, there’s a seaweed experience taking place on Coney Island. An exploration and identification walk will be followed by brunch of mussels cooked over an open fire, accompanied by local beers. Places are €65 for adults and €32.50 for children, and can be booked throughirishseaweedkitchen.ie. The Radisson Blu Hotel & Spa in Sligo has a two-night B&B package on Sunday 4th and Monday 5th August for €300 for two people.

Raise a glass to pepper

Champagne and pepper might not be one of the world’s best-known food and wine pairings, but according to Krug, we’re missing a trick. The Champagne house, widely recognised as one of the best (and most expensive) to come out of France, has teamed up with three Dublin restaurants for “Krug X Pepper”, which will see each pair a dish featuring pepper with a glass of Krug.

At The Greenhouse, Michelin-starred chef Mickael Viljanen will serve hand-dived scallops with frozen oyster, elderflower, jalapeño pepper and caviar (part of the set menu, with Krug at €65 per glass). At Montys of Kathmandu, you can try monkfish and pepper sashlick or jumbo prawn tareko (€68 and €69 for the pairing), while at Rosa Madre they’re serving anchovies marinated with red and yellow peppers and croutons with burrata, sweet paprika and toasted pine nuts (€45 for the pairing). Luxury Champagne doesn’t come cheap, but if you’re going to do it, you may as well do it right.