Bracing walk through Connemara with a cooling swim at the end

Walk for the Weekend: Beautiful tors at Altnagaighera summit on Lettergesh Loop pre-date the dinosaurs 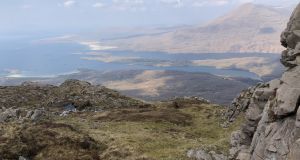 This walk has the loveliest start point, directly above a beach with beautiful sea views of rock and island. The only problem is that, on a good summer day, a hangout and a cooling swim might prove more seductive than a sweaty hike up the daunting mountain directly behind you.

This is Benchoona, the first of the three hills you will hopefully take in on this compact loop walk through the unfrequented cluster of hills between Kylemore and the Atlantic.

I set off from the car park on a hazy sunny day of muted pastel colours, intending to do the walk in a clockwise direction. I took the clean access to this loop along a track that commences just 20m to the left or east from where you emerge up from the car park onto the main road. This track is marked as a broken line on OSI Sheet 37, and is clearly visible on Google Earth imagery. Closing all gates behind you as you go, break off left just before a bridge at 150m of altitude and a bit less than 1km up from the road.

The 430m of climbing from the little bridge to the summit of Benchoona was tough, but ground conditions as always were much easier than suggested by the daunting rocky prospect from the car park. That said, be prepared for the frustration of several “false” tops before summiting this complex mountain. The consolation for the effort, however, is that the going and underfoot conditions relax considerably after Benchoona, the views are great and there remains only another 80m of climbing as you progress over Garraun and around to very special Altnagaighera.

The real wonder for me that day was the imagination-stretching conglomerate tors on the summit of beautiful Altnagaighera. The smooth rounded stones embedded in these tors, many bigger than footballs, are not fossils. Except for a few scratches and scrapes, they are exactly as they were when the sands of an ancient long-gone seashore or vast tumultuous river finally interred them. They would have been immensely old before the dinosaurs began, and would have felt only the slow undulating shift of continents before the earth-shaking thud of the asteroid that ended them.

Hang out there, feel the smooth curve of their cold surfaces, and give time for your imagination to try to grasp the “deep time” between now and the sandy embrace that locked them in place all those hundreds of millions of years ago.

And, if your head is not done in, wind your way carefully back to the head of the track (again marked on Sheet 37) on the broad northwest flank of the mountain, onto the little bridge and back to your car. Note the similar and familiar stones of the active storm-beach beside your car, some half buried in soft sand of our own time. Then clear your head with that cooling Atlantic swim.

Effort/Suitability: moderate to high level of fitness, and mountain navigation skills; about 8km and 660m of climbing.

A Greek chicken souvlaki that is fun, fresh and familiar
9