Walk for the Weekend: A short headland gives a new perspective of its larger neighbours 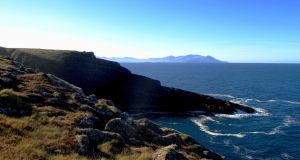 Just as small stand-alone hills can provide big mountain views, a short headland can give a new perspective of its larger neighbours.

In contrast to the long elegant promontories of the southwest coast, Kerry Head, despite its regal title, is a stumpy protuberance protecting the northern end of the dramatic Banna Strand at Ballyheige. But just as small stand-alone hills can provide big mountain views, a short headland can give a new perspective of its larger neighbours. Such is the case with Kerry Head, situated as it is midway between the Dingle Peninsula and Loop Head.

I was lucky to start early on a summer’s morning when the slowly ascending sun was silvering the inner reaches of Tralee Bay while a bank of sea mist enshrouded the lower slopes of the still darkened Sliabh Mish Mountains. As the sun rose higher, illuminating the upper slopes, the still low angle of the rays picked out every corrugation on the inclines. This is one of the benefits of an early start, especially in summer, as the midday sun obliterates the delightful interplay of shade and light that enhances the view of a mountainscape.

There are many options for walking on the peninsula, but I opted to circle around its seaward end. As I parked the car the sun had risen higher allowing a superb view of that most elegant of massifs, the Brandon Range. From my starting point it was but a short walk across moorland to reach the tip of the headland on which lie the ruins of a promontory fort.

Close by is the western end of An Cliadh Rua (The Red Ditch), which appears sporadically across the peninsula. Presumably it is of similar origin as the better known Cliadh Dubh (The Black Dyke) in the Blackwater Valley and the Black Pig’s Dyke in Ulster. Their purpose was possibly to mark out territory between kingdoms and are of Iron Age origin.

The cliffs here are not particularly distinctive but, I would imagine, it would be a dramatic scene indeed after a northwesterly storm when great Atlantic rollers would be dashing themselves to pieces in a frenzy of foam and spray against their implacable hardness.

I continued to contour around the top of the cliffs, ending up on the road network at Dreenagh and headed east for 3km. I came to a track on the right, which led me on to open moorland, and I was able to traverse the high points of the headland. I paused on the highest point, Maulin Mountain (217m), to reflect on the drama of misadventure that occurred here at Easter 1916.

The SS Libau (masquerading as a Norwegian ship, the Aud) hove here on Holy Thursday, laden with munitions and expecting to be met by Roger Casement, who was captured when he landed on Banna Strand on Good Friday. Meanwhile, the Kerry Volunteers had been instructed to await the ship at Fenit. Three British destroyers approached and escorted the ship towards Cork Harbour, off which the captain scuttled her to avoid the British capturing the cargo.

Today, the only drama in the placid scene was the gestation of a cumulonimbus cloud in the overheated hollows of the Brandon Range.

Start/Finish: The end of the 3rd class road that runs from Ballyheige along the southern side of the headland. Grid Reference 684 305

How to get there: Ballyheige is on the R551, north of Tralee.