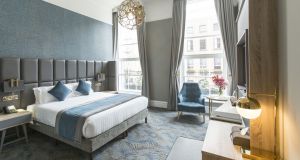 A bedroom in the new Iveagh Garden hotel on Harcourt Street. Rooms facing the street have triple-glazed windows to block out the noise from the busy street.

Europe’s “first sustainable hotel” opens in Dublin today. The Iveagh Garden on Harcourt Street will source all of its energy from an underground river, running 50 metres below the hotel. Large turbines will convert power from the river Swan to meet all of the hotel’s energy requirements.

The Iveagh Garden is the first new hotel to open in the city this year and will relieve some of the pressure on rooms in the capital; its sister hotel, the Harcourt Hotel, has been running at 98 per cent occupancy. The new hotel cost €40 million between acquisition costs and subsequent renovation.

The McGill family, comprising Brian and Sally and their five children, aim to create the lowest possible carbon footprint for the hotel. The building they have converted was a 40 year old modern build behind a Georgian facade. The entire heating, plumbing, cooling and hot water systems were removed and replaced with the new natural energy system.

The Iveagh Garden is the latest property in the McGill portfolio which already includes the Harcourt Hotel, Harrington Hall and the Black Door cocktail and piano lounge on Harcourt Street. All five siblings and parents are involved in the business.

Guests staying in rooms at the side and back of the property will have great views of the Iveagh Gardens. Harcourt Street is an extremely busy street, but guests staying in the front of the hotel, where rooms form part of the Georgian facade, will be separated from the trams and partygoers by new triple-glazed windows.

The hotel is contemporary modern in style, with a selection of rich wallpapers, touches of brass, gleaming mirrors, stylish tiled floors and lots of Navan-manufactured furniture. Where possible, most of the furniture, fixture, bespoke carpets and fittings have been sourced in Ireland.

The hotel will employ 130 people from the start and Darren O’Brien, who has worked in the Shelbourne and Chapter One, has been appointed as head chef. The hotel’s restaurant will be bistro-style and will focus on quality Irish produce. There will an outdoor terrace overlooking the gardens.