‘Trump slump’ hits president’s hotels worldwide - but not in Ireland 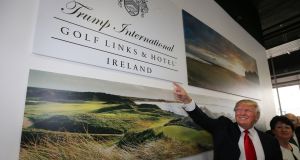 Donald Trump at the opening of the Doonbeg golf links and hotel in Co Clare. Photograph: PA

Donald Trump’s Doonbeg hotel is the only one of 13 of his hotels that has avoided a slide in room rates since his inauguration.

For travellers, that means you will get the best value at Trump Las Vegas, as long as you don’t mind the US president’s name being on the door. The hotel was the hardest hit and the cost of a two-night stay has dropped by 63 per cent. In January 2017, before the inauguration, the average cost of a two-night stay in a standard double room was £637 (€713), according to FairFX. A two-night break in January 2018 can be booked for just £237 (€265).

Only Mr Trump’s Doonbeg hotel saw an increase in rates. A stay at Trump International Golf Links and Hotel Ireland rose from £334 to £357 (€374 to €400). This year will be the best year of trading at the Co Clare hotel since it opened in 2006, according to according to Evan Butler, director of sales and marketing.

Up to the end of October 2017, 54 per cent of guests originated from North America, with a typical stay of three nights, says Mr Butler. Guests use the hotel as a base to explore the Wild Atlantic Way and as a hub for the links golf courses in the region. And he doesn’t expect any slow-down next year.

“2018 is pacing ahead of the same time last year in all market segments and geographical locations, especially the domestic Irish market, which indicates further growth and more records for the coming year,” he says.

Earlier this week the Central Statistics Office (CSO) published figures showing a 3.1 per cent growth in the number of overseas visitors to Ireland from January to October this year, compared to same period last year.

Commenting on the figures, Niall Gibbons, Tourism Ireland CSO, highlighted the numbers of travellers from North America. “We have seen exceptional results from North America this year - up 16.4 per cent on January to October last year,” he said.

The room rate slides across the Trump properties included in the FairFX research also included premium rooms and suites, which means there are significant discounts on top-end rooms and packages. For example, a two-night stay in the executive suite at Trump Panama cost £3,129 (€3,532) in January 2017. In January 2018 it will cost £814 (€919).

“One year after Trump’s inauguration, prices for a weekend in one of his hotels have for the most part decreased,” said Ian Strafford-Taylor, FairFX chief executive. “While big events, like the inauguration in Washington, will usually cause prices to rise in that city for a particular weekend, the decreases in other places suggest that it doesn’t necessarily pay to be president.”

Though there may be other factors that contribute to the rate slides, such as a strong dollar impacting travel to the US, FairFX suggested the falling prices were also indicative of a widespread fall in demand with travellers apparently put off by Mr Trump’s policies. Last year, there were reports that Mr Trump’s presidential campaign was also hurting his hotel business. Online travel company Hipmunk reported a drop in bookings during Trump’s presidential run in May.

Mr Trump no longer manages the hotels that bear his name, but he has not divested from the business leading to conflict of interest concerns by some Democratic Party politicians and business leaders. The hotels have attracted incidents of vandalism and protest since he became president.