Next week, Spike Island in Co Cork could be named world’s best tourist attraction. Is it?

Spike Island won Europe’s Leading Tourist Attraction at the World Travel Awards in September. Other contenders included the Acropolis and the Eiffel Tower. We take a look at the life of convict on the island. 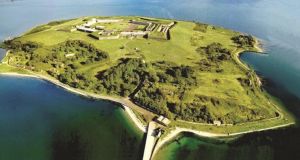 Spike Island: its rivals include the Burj Khalifa skyscraper, the Great Wall of China and Mount Kilimanjaro

Spike Island, a short boat ride from the pier at Cobh, Co Cork, has been in the news for vastly differing reasons over the years and decades.

Back in the 1840s it served as a holding place for “convicts”, people usually guilty of stealing food during the Famine, before being deported to Tasmania. Among those held there was the nationalist John Mitchel.

During the period 1985-2004, it was a prison for young offenders. It made headlines in 1985 when there were riots and prisoners temporarily took over.

The most recent newsworthy event for Spike Island was in September when it won Europe’s Leading Tourist Attraction at the World Travel Awards. Other contenders included the Acropolis and the Eiffel Tower.

The day I turn up for the ferry to Spike Island, not long after the announcement of the European award, the pier is crowded. Extra boats have been put on, due to the increased demand for tickets, all down to the media attention generated by the prize.

Who doesn’t want to see a tourist attraction that won out over one of the most famous ancient sites in the world, and a steel structure that doubles as a symbol for an entire country?

Noel McCarthy is our guide (there are several), and he musters us briskly on the pier once we disembark the boat. “What’s the difference between the happy visitor and the very angry prisoner?” he asks us. We look at him blankly. “Missing your assigned time for your boat back,” he says.

They are so busy that each boat to and from Spike has a quota of passengers, based on timed tickets. If you miss your slot, tough luck. You’ll have to wait a long time for the next one. Or perhaps take up residence for the night in one of the derelict prison blocks.

Our warning heeded, McCarthy explains there are actually four ways to see Spike. We can go with him; download the Spike Island app and self-guide; use a provided audio guide; or self-guide with paper maps we received on boarding at Cobh.

It’s a very modern mixture of tour-guiding, with everything from a personal tour, to doing to your own thing, to using a smartphone to guide you. I choose to follow McCarthy on his tour.

The main event of Spike is the six-bastioned fort in the centre of the island. As you approach, the fort is intimidating, with forbidding high walls, from atop of which any usurpers could be spotted long before arrival up the hill. The inner gates to the fort were stoved in with a JCB by the prisoners who escaped their prison blocks in 1985 (but not the island itself), wreaking havoc in their wake.

Some three weeks before the riots, one prisoner, Gerry Molloy, made his own escape. According to a report in The Irish Times of August 8th 1985, Molloy, who was on Spike for “doing loads of houses”, escaped and climbed up a 70-foot mast. And there he remained in protest for more than two days, strapped in with rope he’d brought up with him, and sustained only by a packet of Goldgrain biscuits and a bottle of water.

I have hopes of seeing this storied mast, but assistant manager Tom O’Neill tells me it was taken down shortly after Molloy’s stunt.

“It was the starvation brought him down in the end,” he says. In any case, the authorities at Spike had a lot more to deal with a few weeks later, when dozens of prisoners broke out; set fire to one building, and occupied the roof of another.

Spike Island still feels very much like a prison. After all, it was one until as late as 2004. There is a gritty atmosphere once you walk inside the walls of the fort; the exercise yards, the bars on the windows, the uneasy sensation of confinement. The building that prisoners set fire to in 1985 is derelict, as is an adjoining block.

McCarthy takes us into a cell block in yet another building, known as “the modern prison”. Martin Cahill, the notorious criminal known as “The General” was once held in this block.

The walls of the cells have been painted, and the place cleaned, but everything else has been left more or less as it was. Four beds to a cell. Fat televisions with cathode tubes. The toilet with no door. Biro graffiti on plastic mattresses, with real names of former prisoners.

Another guide, Deborah Baume, brings me into a second cell block, where they conduct tours at night by candlelight. In these cells, more or less identical to those with graffiti on the plastic mattresses, time has marched on unchallenged.

The paint is peeling from the walls, there is dust and grit everywhere, and a tour of this block by night is a special highlight. I find it all creepy, but obviously many visitors delight in exactly this atmosphere, as the night tours are very popular.

There’s another cell block on view; a punishment block. It’s one of the original old blocks, where isolation cells were the norm. I levitate a few inches when I spot my first rat, but Baume assures me it’s only a taxidermy one. “I have to dust them down every so often,” she says.

Some of these cells recreate the era of when prisoners would have been held here, back at the end of the 19th century. In one tiny cell, the mannequin of a wretched prisoner and his rodent companion huddle together miserably. Eerie audio of coughing playing on a loop compounds the sensation of claustrophobia.

There are several other elements to Spike Island, although the key element is the tours of the old cell blocks. There are bastions with guns, a gun and tank exhibition space, and an exhibition about the 1985 riots. There’s also a modest on-site café.

Spike Island, which is now owned by Cork Co Council, opened to tours in June 2016, after some €6.5 million had been spent to make it safe for visitors.

John Crotty, who is Spike’s general manager, says they got 27,000 visitors last year. By the end of this year, they are hopeful of having received 45,000. Their European Award has already helped build the business, and they plan to run two ferries a day next season: the current single ferry has to do all the trips.

Crotty tells me of big plans for Spike.

They are hoping for €40 million from a number of funding sources for future development of the island. Among the projects being discussed are converting some of the buildings into a national aquarium and a national military museum, but these are high-cost initiatives and are some way off yet.

Now that I’ve been to Spike Island, I’ve seen or experienced five of the nine attractions on the World Travel Awards list. The list is curious mix of the built environment (the historic walled area in Manila city); natural landscape (Rio’s famous Sugarloaf peak); and downright commercial (the Ferrari theme park). How does Spike Island measure up against the others on the list I’ve seen? (The Burj, the Great Wall, the Vegas strip, Machu Pichu.)

In truth, they are all so different it’s baffling to know how the judges will arrive at their decision. Is Spike Island as worthy of a visit as trekking for days in Peru to see Machu Pichu? It’s a near-impossible comparison, but what’s certain is that its appearance on this list has put Spike Island into the tourist stratosphere.

For the moment, Spike Island remains a destination caught in time. It is a piece of our social, political and military history – a genuinely atmospheric place that you should see it while it remains that way.

How to avoid the 21 biggest baking disasters, from burnt cakes to soggy pastry