Walk for the weekend: Sublime serenity of Silvermines Ridge 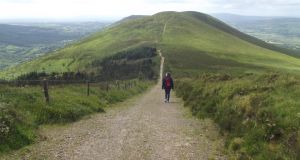 Places past generations could never really have aspired to reach – like the Silvermines Ridge – are now just an effortless spin away.

The automobile has much to answer for. It pollutes our atmosphere, chokes our cities, isolates us from communities, creates obesity and exterminates us in thousands.

Imprisoned behind glass, we are confined to desultory waves at our mostly unknown neighbours, yet we remain besotted with cars. Our love is obsessive because the auto brings unparalleled freedom: to go where we want, when we want, as often as we want. Sublime, but isolated, places past generations could never really have aspired to reach – like the Silvermines Ridge – are now just an effortless spin away.

Silvermines draws its name from a mining tradition dating back to medieval times. In the 19th century, mining employed many hundreds within the then brutally hard and desperately dangerous business of ore extraction.

For a bird’s eye view of the abandoned mine workings, I set out on a crisp November morning from a place referred to locally as The Step, where the carpark allowed me to effortlessly reach a 390m altitude.

Following the blue arrows for the Knockandroe Wood Loop, I descended gently through woodland and gained an expansive prospect over the isolated Mulkear Valley. Here, I mused that if there is ever a contest for the title,” Hidden Valley of Tipperary”, this sequestered glen will surely occupy pole position.

Ascending as the terrain segueing to a track, I entered forestry after passing a couple of large boulders.

Exiting the woodland where the east-west trending Silvermines Ridge intersects the Loop, it immediately struck me how the vista contrasted sharply with the Mulkear Valley; here the flat, fertile and well populated plains of North Tipperary misted to a distant horizon.

Abandoning the Loop, I went left by striking out over a fence and continuing along the crest of the ridge that is defined by a path running west with reasonably pleasant underfoot conditions.

Crossing a spot height at 470m, I descended and then reascended to gain the highest point of the Silvermine Mountains. A great panorama now exploded north and west: the great liquid expanse of Lough Derg, the Arra Mountains, the Clare Hills and in the far distance, the unmistakably angular Macgillycuddy’s Reeks.

Directly below were the sadly forlorn workings and tailing ponds from the mining era and an oddly attractive stone building that is now bereft of purpose. Reminiscent somewhat of a medieval castle and now under a preservation order, it once housed the cutting-edge technology of the 19th century: a Cornish steam engine that pumped water and raised ore.

Scattering nearby are the abandoned mine buildings which immediately remind me that ore extraction is a fickle endeavour, hugely dependent on price. In the end, it was falling demand that abruptly ended the mining tradition of the Silvermines in the late the 20th century.

Already the forces of nature are busy re-wilding the spoil heaps that stand sentinel to this once industrialised landscape. Reflecting on how nature ultimately defeats all human endeavour, I retraced my steps to cross the fence encountered earlier. Here, a well-constructed path led briefly, but steeply, to the summit of Coolyhorney Hill, where another sweeping vista unfolded to the Slieve Bloom Mountains and the Devil’s Bit. Then, I followed the walking arrows along sympathetic tracks to my serenely elevated parking place at the Step.

Start/finish: From Nenagh take the R500 to Silvermines. Continue south through the village for about 2.5km to gain the trailhead.

Suitability: There are few navigational difficulties or other hazards but boots and warm clothing are essential.

‘Once you are not lily-white or freckle-skinned, you are labelled as non-Irish’
5