Walk for the Weekend: A scenic Kerry delight

With views down to Dingle Bay and Inch Strand, Moanlaur Ridge is a beautiful trail 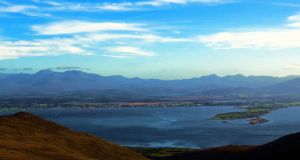 There is nothing more pleasurable, to my way of thinking, than striding along a ridge whose slopes run steeply down to the sea. The north side of Dingle Bay is well-endowed with a succession of such crests, and it is worth tackling one of the more easterly ones to get a direct view down onto the singular panorama of the upper reaches of this magnificent inlet.

I found that the crest with easiest access was the Moanlaur Ridge just east of Inch Beach. There is a sweet start to this as you begin the climb from 270m, the highest point on the road, an impressive spot dominated by the rocky ramparts of Caherconree Promontory Fort high on the steep slopes to the right. It is a straightforward climb up to Knockbrack (490m) along the edge of the cliffs of Coomstabla with great views down into the coom and across to the summit of Beenoskee, one of the highest points on the Slieve Mish Mountains.

From Knockbrack I got my first clear view down into Castlemaine Harbour which is enclosed by the long fingers of Inch and Rossbeigh beaches and their complex sand dune systems. These have long been described as sand spits, but a more likely explanation is that there was originally a terminal moraine, (mounds of rock and soil pushed up in front of a moving glacier), stretching across the bay at this point. Melt waters washed the finer sands and gravel out beyond the moraine. As the post-glacial sea level rose, onshore winds would have blown these sands back on top of the glacial debris, gradually creating the present landform.

The late Prof Donnacha O’Corrain of UCC found evidence in his study of medieval manuscripts that there may have been a monastery at the end of Inch Beach. This couldn’t have been built on sand but would have solid foundations on moraine and then have gradually been submerged by the unstoppable advance of the sand. It is nice to imagine a perfectly formed monastic settlement buried beneath the dunes.

It was time to leave such whimsical thoughts behind and move on to Moanlaur (568m). The col between the two is covered in water-eroded banks of peat, and while one can usually find a route among such outcrops, here it was almost impossible as they were surrounded by water; the safest thing to do is to drop down to a fence which cuts across the col and was obviously erected to keep sheep from getting drowned.

The view from Moanlaur was mighty. The silvered sea outlined the sandbanks in the harbour while across the bay there was a view of Caragh Lake backed by the tricorn of peaks which mark the Coomloughra Horseshoe at the western end of the Reeks. I continued down the ridge as far as Emlagh (481m) and then retraced my steps, all the while spying some new feature to enhance the pleasure of the day.

Start and Finish: The highest point on “the scenic route to Camp Road” which links the R561 with the N86

How to get there: From the R561, take the turning signposted “Scenic route to Camp”, 11.4km west of Castlemaine. From the N86, turn left at the sharp bend on the road, 300m east of the village of Camp