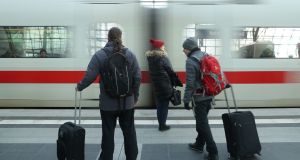 Fares for long-distance rail travel in Germany have dropped for the first time in 17 years, as climate protection measures aimed at making train travel more attractive came into effect with the new year.

Travellers taking trips of more than 50km on Deutsche Bahn’s Intercity Express trains can look forward to fare decreases of 10 per cent.

The company is also cutting prices on special offers and additional services, such as transporting bicycles.

The cheaper tickets are a result of Deutsche Bahn passing on to customers the government’s cut in value-added tax on rail travel, from 19 per cent to 7 per cent.

The company said it believes the price drop would bring in another five million passengers per year.

Germany’s main provider of rail services is a private company in which the state is the single shareholder. Plans to sell off up to 49.9 per cent of the company to private providers were abandoned with the onset of the 2007-2008 financial crisis.

Not all commuters in Germany can look forward to cheaper fares in 2020. Fares for short-distance travel and public transport in regions such as Berlin, Hamburg, Bremen, Brandenburg and the Rhineland are set to increase with the start of 2020, the press agency dpa reported this week. – Guardian