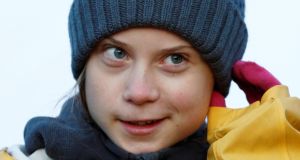 Greta Thunberg: ‘It would have been even nicer had you also reported how friendly and competently you were looked after by our team at your seat in the first class,’ said Deutsche Bahn. Photograph: Guglielmo Mangiapane

Swedish climate activist Greta Thunberg has been criticised by a German rail firm for what it said was her implication that she had spent a journey without a seat on an overcrowded train.

The teenager tweeted a photograph of herself looking pensively out of the window of her German train on Saturday, writing: “Traveling [sic] on overcrowded trains through Germany. And I’m finally on my way home.”

The 16-year-old schoolgirl travelled by train from the COP25 UN climate conference in Madrid via a climate protest in Turin, Italy, on Friday. She is due home in Stockholm to celebrate Christmas with her family after a year travelling the world by rail, sea and road to highlight the threat of global heating.

Deutsche Bahn (DB) was quick to respond, apologising for the inconvenience and saying it was working on improving its trains.

Traveling on overcrowded trains through Germany. And I’m finally on my way home! pic.twitter.com/ssfLCPsR8o

But on Sunday DB went on the defensive, deleting its initial tweet, and chiding the climate activist for failing to acknowledge the lengths its onboard staff apparently went to lead her to a seat in first class.

“Dear Greta,” its press department wrote in a two-part tweet. “Thank you for supporting us railroaders in the fight against climate change! We were happy that you travelled with us on Saturday in the ICE 74 ... but it would have been even nicer, had you also reported how friendly and competently you were looked after by our team at your seat in the first class.”

DB confirmed that she had travelled first class between the cities of Kassel and Hamburg.

But Greta was quick to respond herself, suggesting that DB had overreacted to her tweet by inferring that she had criticised the company for running an overcrowded service.

Contrary to their claim that she had spent the entire journey in a seat in first class, she said in a tweet on Sunday afternoon she had only been able to sit in a seat after Göttingen, more than four hours into her journey, and for the remaining two hours, before having to change in Hamburg for a further connection towards Scandinavia.

“This is no problem of course and I never said it was,” she wrote. “Overcrowded trains is a great sign because it means the demand for train travel is high!

Fellow passengers said she had been accompanied by her father, and that DB staff had given her little slabs of chocolate with the word “lieblingsgast” (favourite guest), which are normally given to passengers in first class as well as second-class passengers in the event of long delays. – Guardian

Is this the best fish chowder in the world?
3