Ashford Castle: Eighty years old and more gorgeous than ever 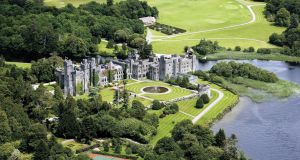 Ashford Castle: The original castle dates back to 1228, when it was built as a stronghold for the Anglo Norman de Burgo family.

A number of years ago I had an American boyfriend who was keen to see Cong, home of the 1952 film The Quiet Man, and Ashford Castle. Americans tend to love castles, so we stayed there.

Like the film, the once magnificent five-star hotel hadn’t aged that well. Sure, there were turrets and stone corridors aplenty and we revelled in the gorgeous view out over the lake, but it felt as if I was on safari into the memory of a now faded past.

The Quiet Man has since been preserved in America’s National Film Registry, for being “culturally, historically or aesthetically significant”. Ashford Castle is also all three. The hotel had followed the vicissitudes of Ireland, ending up in receivership after the crash. The show was kept on the road by the incredibly dedicated team of staff.

The Red Carnation Hotels group acquired Ashford Castle for €20 million in 2013 and since 2015 it has pumped some €68 million into restoring it to its former glory. Most of those wonderful employees remain in place today. This year I went, minus the American, to celebrate its 80th birthday.

Three former general managers - Peter Huggard, Rory Murphy and Niall Rochford - were all there to mark the occasion, alongside Vicki Tollman, director of Red Carnation Hotels.

Red Carnation is a family affair set up by Tollman’s parents, Beatrice and Stanley, who also own The Twelve Apostles in Cape Town, The Chesterfield in London’s Mayfair, and 100 Princes Street in Edinburgh (among others). The name Red Carnation comes from Stanley’s favourite flower. He was wearing one when the couple met, according to his daughter.

Now, Ashford is much-changed from my last visit; a gorgeous blend of luxury and charm. The Quiet Man is still available in the bedrooms, if you want it, as well as in the castle’s private cinema. In the past, the televisions had a set-time evening showing and no-one would turn up for dinner till 8.30pm, after John Wayne had sorted things out with Maureen O’Hara.

In my delightful room is a four-poster bed, that fabulous lake view, and even a minstrels gallery – though thankfully, no minstrels. The walls are hung with silk, and the light fittings and mirror are Venetian. A decanter of sherry sits on a side table and will be topped up if required, I’m assured.

There’s some daylight left, so we go on a walking tour. The original castle dates back to 1228, when it was built as a stronghold for the Anglo Norman de Burgo family. A French-style chateau was added next door in 1715, but it was the Guinness family who joined the two, with the help of James Franklin Fuller, who also “did” Kylemore Abbey and Farmleigh. It’s fun to look at how the different architectural layers reflect the tastes and aspirations of their times.

The Guinnesses bought the estate in 1852, with Arthur Guinness inheriting it in 1868. Probably the richest man in Ireland at the time, he married into the family of Lord Bantry.

Keen to secure his social standing, he went to London where he threw money at things, ultimately impressing Queen Victoria enough that she finally made him a lord too. Ashford Castle soon became a playground for princes, hangers-on and other wealthy types to kick back, drink fine wines, swap stories, go hunting and generally have a marvellous time.

The evening is turning chilly so we go inside where I’m delighted to find that not much has changed when it comes to entertaining at Ashford. There are fine wines aplenty, terrific tales, and tomorrow I’m promised falconry.

There’s something about the atmosphere of the place, and the aforementioned wine, that makes the stories flow. Ashford Castle has not been short of illustrious (and infamous) guests, who we hear all about. Oscar Wilde hung out here – his father, Sir William Wilde, had had an estate next door. The prince of Wales, the one who would go on to become George V, also stayed here. There’s a bar named in his honour.

More recently, the hotel counts John Lennon, George Harrison, Princess Grace, Robin Williams and Rory McIlroy among its many illustrious guests. There are photographs of Ronald Regan, Ted Kennedy, George W Bush, Tony Blair and John Major on the walls, as well as Woody Allen and Mia Farrow, posing on a stay here during their happier days together.

Paddy the night porter tells me how he once made Brad Pitt a ham sandwich, which Pitt declared to be the nicest in the world.

Charlotte Rampling spent time in Room 411-12 (the presidential suite). Pierce Brosnan came to stay when two episodes of his series Remington Steele were filmed at the castle. Brosnan, “a lovely man”, subsequently got married here, in a lavish wedding underwritten by Hello magazine.

We eat in a smaller space off the main dining room, flanked by cabinets containing a vast silver-gilt service made for John A Roebling, who designed the Brooklyn Bridge. Later, Annette – who had played harp back when the American and I had stayed – entertains us over a signature Ashford Castle whiskey in the bar. I get lost on my way back to my room. Castles are rambling; I won’t blame the whiskey.

Despite the night’s adventures, I’m up early the next day to try falconry. The feeling of such an extraordinary creature fly towards your gloved hand, to alight like a whisper at the promise of a bit of dead mouse, is incredible.

The Tollmans have rescued an amazing piece of Ireland’s history here at Ashford Castle. I feel very lucky to have experienced its charm twice.