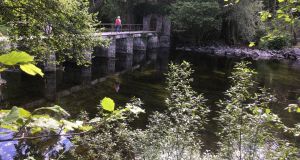 There is a pretty, castellated footbridge over the Cong river, where another scene from The Quiet Man was shot.

By any standards, The Quiet Man is an extravagant excursion into twee stage Irishness – an enormous cliche from start to finish. It had no relevance even to the Ireland of 1951, when it was made, yet it has remained one of the most enduringly popular movies of all time.

The reason, I guess, is that it was never intended as a commentary on Irish life. Rather, it is a sentimentalised view of Ireland recounted to director John Ford by his Emerald Isle-born parents and has been loved ever since by misty-eyed diaspora. Rewatching the movie recently, I concluded that, if viewed as a journey into the imagination of a second-generation Irish immigrant, it works admirably.

Prompted to set off on my own sentimental excursion, I headed to the village of Cong, Co Mayo around which much of the movie was filmed. Located on an isthmus between Lough Corrib and Lough Mask, I immediately found it easy to see how the place came to be viewed by Ford as the quintessential Irish village.

After coffee in Pat Cohan’s bar, where part of the famous fight scene between John Wayne and Victor McLaglen was filmed, I ambled down the village street. Then, it was on through Cong Abbey. This is an Augustinian foundation whose main claim to fame is that Rory O’Connor, the last High King of Ireland, is reputed to have died there in 1198.

Beyond is a pretty, castellated footbridge over the Cong river, where another scene from the movie was shot. Beside it is an odd-looking building that was used by the abbey monks as a fishery.

Onwards then through Cong Woods, which was once part of the 26,000-acre Ashford Estate owned by the Guinness family. Following the red walking arrows beneath a canopy of green, the route traversed a convenient tunnel beneath the Cong-Cornamona road. Further on, I climbed down into Pigeonhole Cave to see part of the subterranean river that drains from Lough Mask into Lough Corrib and is reputedly the abode of a magical fairy trout.

Afterwards, the trail galloped on past a ruin known as the priest’s house before I made a short diversion to visit the 20m-high Guinness Tower, which was built in 1864 by Benjamin Guinness, then Ireland’s richest man. It promised expansive views over the wooded, lake-strewn Cong countryside so I scrambled up the spiral staircase to the top. Unfortunately, it didn’t live up to its billing – the surrounding trees totally obliterated the view.

Disappointed, I returned to earth and followed the trail by a woodland path skirting the edge of the Ashford Castle estate. This led me back to the banks of the Cong river.

Here, the right-hand option leads along the riverbank to the grounds of the castle. If you take this choice, be warned. You may be required to shell out €15 for the privilege of entering the estate. This expense could prove worthwhile, for the gardens are indeed magnificent and you can visit another film location (Squire Danaher’s House). But you won’t be able to visit the private lawns or enter the castle itself.

Today, I opt for the less expensive upstream option that leads by trout-rich waters, where anglers are languidly fishing, to Cong village and a welcome bite in the atmospheric surroundings of the Hungry Monk Cafe.