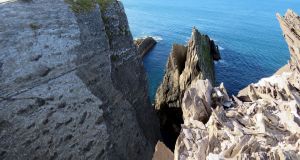 Brow Head bears the distinction of being the most southerly point on the Irish mainland.

Among the numerous headlands and rocky shoals of the southwest, each with its own singular characteristics, Brow Head bears the distinction of being the most southerly point on the Irish mainland. It beats the nearby Mizen Head (the most southwesterly point) by a mere 9m. Both headlands played their part in the early days of trans-Atlantic communications.

It is best to start with Mizen Head, with its series of protected pathways. These allow exploring the tip of the peninsula and crossing the dramatic bridge that spans the deep cleft in the bedrock and through which the sea surges spectacularly when there is a heavy swell. The buildings are all perfectly preserved and there are numerous displays with nautical themes and local history, so you will be well informed when you stride out on Brow Head.

The walk itself is straightforward, with a track leading from the car park south towards the cliffs. The open moorland is interrupted only by a scattering of ruined cottages, which mark the location of a 19th-century copper mine. Divert along the cliffs here to see the green strata in the rock that betokens the existence of the mineral.

The track narrows towards the end and there are views down on to the sea stacks, which stretch out from the promontory. As you push further along it becomes obvious as to why it is called Brow Head – the sheer rock face does indeed look like a forehead facing south to warmer climes and deep blue seas.

Return towards the high point of the headland (108 metres) which has a signal tower dating back to the Napoleonic wars and the ruins of the Marconi Radio Station.

Looking out at the empty reaches of Roaring Water Bay, it is hard to imagine that this area was once a vital hub in trans-Atlantic trade. Sit there and picture the great tall ships heaving to in order to read the semaphores from the shipping agents giving instructions on which European port they were to make for.

When they set sail from the east coast of America, the cargo would not have been sold: the owners would wait to see which port was offering the best prices. The brief sailing instructions given to the masters as they left the New World was “Brow Head for Orders”.

Guglielmo Marconi arrived on the Mizen Peninsula in 1901 and in 1904 set up his equipment on Brow Head. As more ships installed telegraphic equipment, six operators were employed there. Once Marconi had developed Transatlantic Radio Communications, the station became redundant and the building was destroyed during the Civil War.

But as your eye follows the broad sweep of coastline from Cape Clear around to Schull Harbour you will see that the link with Transatlantic Communication has not been completely severed on this coast: On the summit of Mt Gabriel, look for the two white radar domes that now guide air traffic to Europe.

Start & Finish Mizen Head: The Visitor Centre Car Park. Grid Reference: 739 235
Bray Head: A small car park at the end of a 3rd class road. Grid Reference: 778 239
How to get there: Mizen Head: Take the R 591, Goleen to Crookhaven road. Follow the signposts for Mizen head.
Brow Head: Drive back down to the R591. Go right for Crookhaven. 2Km west of the village, there is a Third-Class Road signposted for Bray Head. At the end of the road there is a small car park
Time: Allow 1 ½ hours at each headland.
Suitability: Routes are easy.
Food & Accommodation: Goleen. Crookhaven.