Drone delivery: the Christmas present that’s flying off the shelves

Unmanned aircraft are the must-have gift this season. Which should you buy, and what do you need to remember? 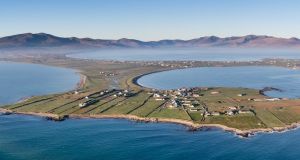 Atlantic Light: the Maharees with Brandon Mountain behind, which Peter Cox photographed with a drone 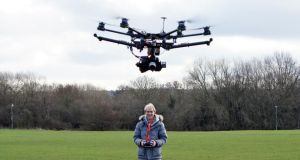 Flying without a licence?: If you want to use your drone to sell images or footage you’ll need an aerial-work permit from the Irish Aviation Authority. Photograph: Richard Newstead/Moment/Getty

Look up. That clear sky you can see may be about to get a little more crowded, as the drone becomes a must-have present for Christmas. Retailers say they are flying – metaphorically speaking – out the door.

“Drones are popular because people love to see things at a new angle,” says Adam Lester, drone buyer for the Harvey Norman chain.

“For videos or photo, you never had a way to capture events from that perspective before. For recreational use they are fun to use. You can record family events or take pictures of any outing, for example hillwalking, and getting a high-altitude picture with the scenery in the background. You can’t get this type of shot with a camera.”

The word “drones” covers a lot. From the miniature nanodrones that are essentially toys, and fit in the palm of your hand, to quadcopters that can carry a small camera, and octocopters that can hold heavier items, the world of drones can be baffling.

What we refer to as drones can also be unmanned aircraft. Typically, the devices are quadcopters, such as the Parrot AR Drone, which has made drones affordable.

But it’s not all fun and games: drones are serious business, at least in the eyes of the Irish Aviation Authority. There’s a list of dos and don’ts associated with owning and operating one, and regulations that depend on what you’re planning to do with your drone.

For recreational use you must follow the regulations laid down for model aircraft. Hobbyists can operate miniature drones in open spaces as long as they do so safely.

When the drone weighs more than 1.5kg, stricter rules apply. Some are just common sense: don’t fly the small aircraft over crowded areas or near obstacles such as power lines; don’t fly in fog; stay away from controlled airspace, such as that near an airport.

You can’t fly them at night, either, though it’s doubtful you’d want to risk your expensive toy in poor light in any case. You have to be able to see the drone to operate it, and drones can fly a maximum of 120m above ground level.

You can’t fly them over urban areas, which rules out a leisurely flight over your local town or city, or over any assembly of people, such as a concert or sports event.

And if there is any doubt about what constitutes a gathering of people, remember that it’s also forbidden to fly the drone within 120m of a person or a vehicle that isn’t under your direct control.

And that’s before you get into the privacy implications of flying an aircraft with a camera attached. That doesn’t leave you with many places to fly your shiny new toys, although the rules are being flouted on a regular basis, it seems. Drones are becoming a more common sight in public parks and beaches, despite the rules.

If you want to use the drone for commercial purposes, including selling footage or images, you’ll need a permit from the IAA for aerial work, and must be a licensed pilot or have completed a remote-piloted-aircraft-system training course.

Pilots also need public-liability insurance, to cover damage should the drone crash into something. At the moment, fewer than 100 permits have been issued in Ireland.

The need for rules has become more apparent in recent months. Although most drones have technology to ensure that they hover benignly if you lose contact with them, that doesn’t prevent all unpleasant incidents.

There have been cases of drones crashing into bridges and near landmarks, including one near the White House.

More seriously, a toddler was injured when a drone crashed into his back garden, despite the operator being an experienced drone user.

More stringent regulations are on the way. From December 21st, if the drone weighs more than a kilo, it will have to be registered with the IAA. The register is the first of its kind in Europe. Drones will also increasingly include technology to prevent them from accidentally flying into restricted airspace.

But it seems that, whether we like it or not, drones are coming. Although it’s unlikely that drones will be dropping off your DVDs any time soon, it’s less of a leap to imagine estate agents using the devices to photograph property they are selling. Similarly, drones could be used to check roofing and others areas of buildings without using a cherry picker or scaffolding. Devices with a longer range could be used by farmers to monitor livestock.

Sky’s the limit: The drone-photography revolution

Using the drones took care of one element of the photography: being in the right place at the right time. “The real advantage that drones have over traditional aerial photography: you don’t have to spend thousands and rent a helicopter to go offshore; you can have it in the car and go out on the chance that there might be a decent sunrise tomorrow morning,” he says. “If it tanks and nothing happens, that’s fine. But if it is good, that’s something you’ll never get with a helicopter. You don’t have that kind of flexibility.”

From lower budgets to high-flyers: Which device?

Parrot AR Drone 2.0 Elite (€300): You could argue that Parrot is responsible for at least part of the drone revolution, as the AR has spawned a successful range for Parrot. The Elite, controlled by your smartphone or tablet, will fly for up to 12 minutes. Its camera shoots in high definition.

3DR Smart Drone (€1,300): Made by 3D Robotics, the Smart Drone concentrates more on the technology behind the drone than the camera, so you’ll need to invest in a GoPro to take photos or video. But this two-computer device acts as a copilot. Its range extends to a kilometre, and you get a dedicated controller that you can slot your tablet into to watch footage as you fly.

DJI Phantom 3 Professional (€1,600): If you’re feeling a little more flush, the Phantom 3 Professional will fly for up to 23 minutes and is capable of transmission up to 2km away. There’s a 4K camera to shoot in ultrahigh resolution and an autopilot that helps you take off, rise to a preset height, and land again at the touch of a button.