Philadelphia here I come: A city break with a difference 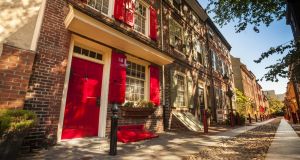 Philadelphia is the most historic city in the United States; the streets ooze history and memories of American independence and the founding of a nation.

It is also a fun city with great restaurants, live music and stunning architecture. Aer Lingus begin a daily service from March 25th, 2018, four times a week. Here are some suggestions of things to do.

This is probably the most historic square mile in the whole of America. Sites here include the Independence Hall, the Liberty Bell and Congress Hall. Many other important attractions line the cobbled streets of this old area.

Where the Declaration of Independence was signed on July 4th, 1776, and the creation of the United States Constitution in 1787.It has seen some of America’s most important historical moments and hosted some of its most famous fathers.

The museum is an impressive classical building with the famous steps leading up, where Rocky Balboa was filmed, ie Sylvester Stallone in the Rocky movies. The museum is an extraordinary testament to the wealth of many individual Americans who bestowed and bequeathed world renowned art to the museum. Here you will find a Hindu temple, a French empire chateau’s complete rooms and stained-glass medieval windows from La Sainte Chappelle in Paris. Well known paintings are Prometheus Bound by Rubens, Sunflowers by Van Gogh, and at least 20 paintings by Monet plus a whole room of Picassos.

The most famous food of Philadelphia is the Philly Cheesesteak. It is thinly sliced ribeye steak on a crusty roll, garnished usually with onions and cheese melted on top. It’s messy to eat, but delicious. Ask a local for their best cheesesteak recommendation.

Prince Albert of Monaco has bought his mother’s childhood home and will open it next year to the public. The house at 3901 Henry Avenue, East Falls, will serve as regional offices for the Prince Grace Foundation as well as an exchange programme with the Princess Grace Irish Library in Monaco. It was built in 1935 by her father Jack.

Shop till you drop

There is no tax on clothing in Philadelphia, making it a great place to shop. Ordinary shoes and sneakers are not taxed, but some formal shoes are. The King of Prussia Mall, the largest in the United States is worth a visit to the 347 stores, open from 10am - 9.00pm.

Stephen Starr, the James Beard Award winning Outstanding Restaurateur for 2017, has more than 12 restaurants in the city and is recognised as putting the food scene in Philly on the map. Some of his places are long-standing in Philadelphia and still as popular, Buddakan, Alma de Cuba, and Butcher & Singer. There are also some great food markets in the city, including one devoted to Italian cuisine.

The city has a long tradition of musical styles and being at the forefront of musical genres. Every year there are many festivals, from jazz, classical, folk, indie, rock, orchestral, gospel and even ceili.

Garden lovers will be spoiled for choice in and around Philadelphia, where there are 30 gardens to explore. Philaldelphians are great lovers of gardens and arboretums and many are long established.