Can you make a pound cake using the metric system?

Now We Know: Everything you ever wanted to know about this old-time classic 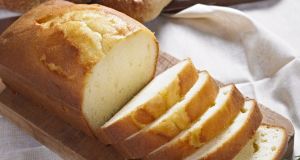 When it comes to baking, the hop between cups, pounds, litres, pints and grams can be a confusing nuisance to an amateur cook, particularly when our source material comes from food writers across the world. Some use metric measurements, while others use the imperial system.

The pound cake is one of those wonderful recipes that act as a story-telling portal to another time. Once you start to pick at the pound cake to figure out its origin story, you soon find yourself down the rabbit hole of the baking battle between measuring by weight (as done by most of the world including Ireland) and measuring by cups and teaspoons (as done in the US). It would really make baking and studying recipes a heck of a lot easier if we could all just pick one measurement system and stick to it, don’t you agree?

It’s widely believed that the pound cake originated in Europe in the 1700s. The English cookery writer Hannah Glasse included a recipe for it in her 1747 tome The Art of Cookery made Plain and Easy. At that time, UK bakers would have been using the imperial system; metric measurements weren’t officially adopted by the UK, and Ireland, until the late-20th century, but most people still tend to use a mixture of both metric and imperial measurements. Have you ever ordered a half a litre of Guinness? I didn’t think so.

Presumably the imperial measurement system travelled to the US with the influx of British colonialists, and it morphed into what is known today as the United States customary units. As for the pound cake’s American conversion, Smithsonian.com quotes a recipe from American Cookery by food writer Amelia Simmons of Connecticut in 1795 which calls for “one pound sugar, one pound butter, one pound flour, one pound or 10 eggs, rose water one gill, spices to your taste; watch it well, it will bake in a slow oven in 15 minutes”. Bakers today will recognise that’s a very short baking time for a relatively large cake – the Smithsonian notes that, because domestic oven temperatures varied so widely, cooking times were very much suggestive and to be taken with a pinch of salt (or sugar, as the case may be) in the early days of food writing

Americans still use the name pound cake, and it appears that the classic bundt cake is based on the same generous combination of butter, flour, sugar and eggs. Here at home, you may be more familiar with this treat by its humble name of loaf cake. Typically it would be about half the size of the traditional pound cake in terms of measurements and it’s one of the best cakes for beginners to learn.