Living with grief: ‘It’s like you’re in a different club’ 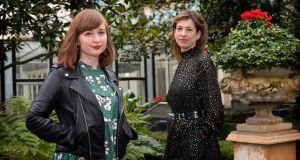 “It’s like you’re in a different club,” muses broadcaster Venetia Quick over a cup of coffee. “You might have friends for 40 years and then suddenly you know something that they don’t know and you’re living a totally different thing. And you’re glad for them that they aren’t in that club.”

Sasha Hamrogue nods. “That’s why we found each other.”

The exclusive club the two women are talking about is one nobody ever asks to join, but one to which many reluctantly gain admission. It’s a circle of people who have endured the loss of a parent, sibling, spouse or child, and been forced to navigate the ensuing maelstrom of grief, loneliness and isolation.

Both women are intimately familiar with all of the above. When she was in her 30s, Hamrogue lost both her mother and father to lung cancer.

“I went through a very difficult time,” says Hamrogue, who later wrote an article for the Guardian about her experience of losing both parents to cancer.

Last year, Quick lost her husband, the well-known club promoter Martin Thomas, just five months after he, too, was diagnosed with lung cancer.

“He had cancer but he dropped dead at home in front of two of my kids,” says Quick. “He had been given a 10 per cent chance of five years and he got five months.”

Following her husband’s sudden and untimely passing, Quick sought to keep busy and threw herself into various different projects. She joined forces with Hamrogue to create Grief Encounters podcast, which explores grief in all its facets. Each episode sees the pair interview a guest about their own personal experiences with loss.

According to Hamrogue, their aim is “to bring the conversation out of the darkness and into the light a little bit”.

They are part of a new wave of podcasters and public figures who are facilitating an open dialogue on the subject.

In the UK, comedian Cariad Lloyd has won praise for her Griefcast podcast, in which she chats with comedians, writers and performers about the death of a loved one. Memorable guests have included Aisling Bea, Robert Webb, David Baddiel and Adam Buxton. It is by turns funny, raw and deeply moving.

More recently, Catastrophe star Rob Delaney has won praise for speaking publicly about the death of this two-year-old son Henry, who died from cancer last year. “I speak publicly about Henry in an effort to destigmatise grief,” he tweeted on St Stephens’ Day. “My family is sad & in pain because our beautiful 2 yr old boy died after a long illness. Why wouldn’t we be sad? Why wouldn’t we be angry and confused?”

It’s on this sadness, anger and confusion that the hosts of Grief Encounters want to shed a light.

“Grief is not an easily placated thing,” adds Hamrogue. “There are no platitudes that are going to fix it. There are all sorts of things that come with it – anger, fear, anxiety. We wanted to talk about all of those things in a really open way.”

“In Ireland, we’re great at funerals and wakes and showing up. People show up in droves. What we have to look at is how we’re there after those first few days.”

To date, the pair have spoken to public figures such as Mikey Graham and Paul Harrington, as well as Kathleen Chada, whose sons Eoghan and Ruairi were murdered by their father in 2013.

“I feel very humbled to have met somebody like her,” says Quick of their interview with Chada. “Having an outlet for people like Kathleen to tell their story is really important because it gives other people that reassurance that it will never be the same but you will come out the other side.”

Not only does the podcast aim to provide comfort and solace to those in mourning, it also affords people the opportunity to talk about their loved ones.

“I think that’s something people are scared of when somebody dies,” says Quick. “It’s almost like, ‘Don’t mention the war, sweep it under the carpet’.”

“Rob Delaney talks a lot about how you’re not bringing the person up,” says Hamrogue. “The person is thinking about the person they have lost already. What we have felt on the podcast is we get to ask people questions about people they’ve loved and you can see in all of the interviews they just light up the minute you ask them.”

Both women hope these in-depth conversations will normalise the discourse around grief and help people to feel less alone. Moreover, they hope to provide people who have not suffered a significant loss of their own with the tools to support those who have.

“What struck me is that so many people haven’t been in that situation and they feel helpless,” says Quick. “They don’t know what to do or say. So hopefully the podcast can help people help their friends or their parents or whoever it may be and understand what they’re going through a little bit more.”

More than anything, though, it’s a chance to channel their own pain and heartbreak into something worthwhile.

“It keeps Martin alive a little bit,” says Quick. “It’s something positive to come from something shit.”

Grief Encounters is available on iTunes and Spotify

Róisín Ingle: It's only been two months. It feels like 200 years
9