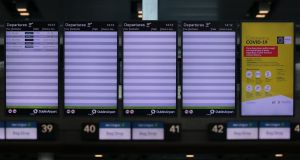 Passengers’ anger at airlines pressing them to accept vouchers instead of refunds for cancelled flights has mounted as the Minister for Transport considers rule changes that would allow cash to be replaced by credit notes.

Shane Ross’s department says that although passengers remain legally entitled to full refunds if flights are cancelled, it has to protect businesses and jobs in the travel and airline sector. Rules governing flight cancellations are “important consumer-protection provisions”, according to a spokeswoman, but Covid-19 poses enormous challenges about how to protect “jobs and at the same time stand over consumer protections”.

On Monday it emerged that Ryanair had joined a significant number of other airlines, including Aer Lingus, in primarily offering vouchers to passengers whose flights have been cancelled as the coronavirus crisis continues. The move infuriated many customers who had previously been told that their refunds for cancelled flights were being processed.

I paid €528 for flights for Christmas presents for my family. I am aware that this is not Ryanair’s fault, but I have lost my job and really could do with my money back

Following the apparent U-turn, passengers were told they would have to wait until the Covid-19 pandemic had passed before applications for refunds would be considered. Emails that the airline sent to affected passengers included details of vouchers that could be used for the “purchase of Ryanair flights and other services at any time over the next 12 months”.

The company also warned that “as our customer care agents are required to work from home to limit the spread of Covid-19 virus, payment-security restrictions prevent us from processing refunds as quickly as we would like to”.

Many passengers have contacted The Irish Times to express their unhappiness with the latest move. Some wonder why the vouchers are only valid for a year when legislation passed before Christmas says all vouchers issued in Ireland must last for at least five years.

Ryanair can impose a shorter expiry date because a clause in that law says vouchers that are not “supplied, marketed, provided or otherwise made available to be given as a gift” are excluded from the new rules.

“I paid €528 for flights for Christmas presents for my family,” Fiona Murphy, a Ryanair customer, says. “I am aware that this is not Ryanair’s fault, but I have lost my job and really could do with my money back. Ryanair have had the use of my money for six months. I do not want a voucher.”

Another customer, Mike Temple, says he was told last month that flights he paid for last July had been cancelled. He applied for the refund Ryanair offered him and received confirmation that it would be processed.

This week he received a voucher. “We do not want a voucher. One line states if we want a refund then [Ryanair] won’t pay it until Covid 19 is over. Over where? In the UK, Ireland, Europe, the world?”

Eoin Kingston paid more than €670 for return tickets to Lisbon. When his flights were cancelled he was told he could pick new dates or ask for his money back. “Given the uncertainty about when restrictions on travel would be lifted, I requested a refund. The email said I would be refunded in 20 working days but due to the high level of requests to bear with them.”

Then he received a voucher. When he decided to follow an “inconspicuous” refund link on his Ryanair email, it led him to the airline’s website, which was once again promoting the voucher, “now called a refund voucher”.

Under long-standing European Union regulations, passengers on cancelled flights must be offered the choice of a refund, a rerouting at the earliest opportunity or a rerouting at a later date. Aer Lingus and Ryanair have both insisted they are fully compliant with all EU refund rules.

In a new statement to The Irish Times on Wednesday, Ryanair stresses that it will give affected customers “all of the options set out under EU regulations, including free moves and refunds in the form of cash or vouchers”. Cash refunds are taking longer than normal to arrange because “we are having to process 10 times the usual volume and have fewer staff available due to social-distancing measures”.

It says it is offering vouchers and free date changes “as these are automated and would give customers an alternative”, adding that “customers who choose not to accept a free move or voucher will be refunded in due course, once this unprecedented crisis is over. We apologise for any inconvenience this may cause and we thank our customers for bearing with us.”

Minister for Transport Shane Ross is considering credit notes as an option, his department says, ‘in his determination to strike a fair balance between protecting jobs and consumers in these unprecedented circumstances’

The Department of Transport says that under the package-travel directive that the EU issued in 2015, “customers are entitled to a full refund of holiday bookings where they have been cancelled due to exceptional circumstances. That remains the case. Similarly, under EU regulation 261, airlines are also required to refund their customers in circumstances where flights have been cancelled.”

But the spokeswoman adds that there is “no doubt that the sheer scale and breadth of the impact of Covid-19 are having a very serious impact on the financial position of all companies in the travel sector, from large airlines right through to small, local travel agents.”

Other EU member states have introduced credit notes “as a means of resolving this dilemma. On the one hand, these serve to give companies some breathing space and on the other hand make sure that the value of bookings is protected and honoured. There is no easy solution.”

Minister for Transport Shane Ross is considering credit notes as an option, she says, “in his determination to strike a fair balance between protecting jobs and consumers in these unprecedented circumstances”.

She advises customers who are having difficulties with airline refunds to contact the Commission for Aviation Regulation, which is responsible for enforcing air passengers’ rights. Customers having difficulties with refunds from other travel companies should contact the Competition and Consumer Protection Commission, she says, as its responsibilities include protection for package-holiday customers.

Readers on homeschooling: ‘Kids aren’t missing out and they’re not in a war zone’