Covid-19: Number of hospital deaths in Northern Ireland rises to 250 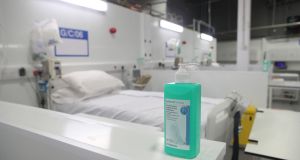 The number of coronavirus-related deaths in hospitals in Northern Ireland has risen to 250. Photograph: Danny Lawson/Getty/AFP

The number of coronavirus-related deaths in hospitals in Northern Ireland has risen to 250, according to the Department of Health (DoH).

This includes eight deaths which occurred on Tuesday, as well as 26 additional fatalities which the DoH said happened in previous days that have now been added to the official record.

The health minister, Robin Swann, said he appreciated the latest total would “cause some alarm, given the scale of the increase from yesterday.”

But he said daily figures were “compiled for surveillance purposes to help us track the virus and keep the public as informed as possible,” and would “always be subject to some degree of revision, as deaths will be officially registered at different times in busy hospitals.”

According to provisional data released by the Public Health Agency (PHA) on Wednesday, as of April 20th there were 297 confirmed cases of coronavirus in nursing and residential homes in Northern Ireland.