Bobby McDonagh: EU leaders will play to type on Coronabonds at today’s summit 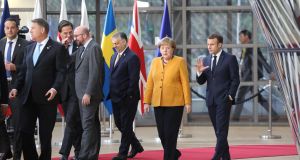 EU leaders arrive to pose for a family photo on March 22, 2019 in Brussels at the end of an EU summit: LUDOVIC MARIN/AFP/Getty Images

The national characteristics of individual EU Member States will play an important role in Thursday’s vital discussions at Heads of Government level on the EU’s economic response to Covid-19.

Of course, national interests and European alliances will also be very much in play; and the principal ingredient in this week’s discussions, often ignored in media commentary, will be rational consideration of the highly complex issues involved. However, I know from direct involvement in EU negotiations over three decades that national traits help to shape many European debates. On Thursday the characteristics of certain Member States are likely to be very much to the fore.

The Netherlands has placed itself centre stage as leader of the more rigorous faction of Member States opposed to any mutualisation of the debt of Eurozone countries. The Netherlands is normally very comfortable playing ‘hard cop’ in EU debates. Traditionally it relishes the role of being inflexible in defence of a principle. Now that the UK has left the European Union, the Dutch are pretty well alone in being entirely convinced by their own rhetoric. The characteristic that tends to distinguish them from other Member States is not the belief that they are right, for that is what all Member States believe, but rather a somewhat calvinist conviction, from time to time, that they are God’s elect and that the other Member States have strayed from the one true path.

Italy, which at the moment leads the opposing faction that supports the introduction of coronabonds, demonstrates its own national characteristics around the EU table. More than other Member States, Italy tends to favour a philosophical approach, often more focussed on what it considers to be an underlying truth than on the detail of specific texts or drafting solutions. During the present crisis, the fundamental truth up which Italy has run its flag is that the mutualisation of debt between Member States is a prerequisite for Europe’s future. Italy also has a tendency towards a lack of national self-confidence, however unjustified, that can make criticism or implied criticism intolerable.

None of this is to single out Italy or The Netherlands for criticism. On the contrary each of those countries makes an immense contribution to the complex European tapestry. It is simply to identify certain national traits which will play into this week’s discussion between the 27 Heads of Government. That discussion will be all the more crucial because it seems that some have decided to play with fire by unnecessarily talking up a disagreement on a matter of important principle for both sides into an existential issue for the Eurozone or even for Europe itself.

This is where other national characteristics will come into the reckoning on Thursday. A great responsibility will fall to Germany and France, lined up respectively as they are behind the current Dutch and Italian arguments. In Europe, as so often, it will fall to those two countries to forge the broad shape of an agreement, not because they agree on so much but because they come from different starting points on almost everything. The German instinct for consensus will be steered by the experienced Merkel. The French instinct for leadership, given full vent by Macron in recent times, will be tempered by the knowledge that you can only lead as far as others will follow.

Countries such as Finland and Ireland, although likewise on different sides of the current controversy, share an important characteristic. They are proponents and exponents of compromise. They will, I expect, be amongst the many Member States seeking this week to ensure a reasonable compromise between the contradictory tablets of stone which others are bearing down from their respective mountaintops. They will be particularly conscious of the importance of beginning to heal the so-called North South divide which, even if it is real, is exaggerated by a continuing public narrative which assigns Member States to different camps, and which presents everything in terms of victory or defeat. Ireland was right in the case of coronabonds, as well as brave, to break with the stereotype of belonging automatically to an alliance of northern Member States.

The effective pursuit of national interests in the European Union is not to be judged by how deep a Member State can dig in its heels, but rather by its wisdom in knowing when to stop digging if it becomes clear that the hole is going nowhere. National interest is not about clinging in isolation to splendid principles but about recognizing that others also have principles and then reaching agreement together.

Europe is all the richer for the diversity of its Member States and for their national characteristics. Ireland has no claim to any superiority. Sometimes, however, the gentle spirit of compromise is what Europe needs.

Bobby McDonagh is a former ambassador to London, Rome and the EU

1 Ciara Kelly: I was pregnant, unmarried, a junior doctor and I got old-school comments
2 Cork shooting tragedy: Postmortems to be carried out as community shocked by deaths in ‘well liked family’
3 Coronavirus: A further five deaths and 720 new cases reported by Nphet
4 Third person arrested in education board corruption investigation
5 ‘Shellshocked’: Outrage in Australia after women on flight strip-searched in Qatar
Real news has value SUBSCRIBE