So many tears: Conor Pope takes his daughter on her first visit to Santa

I’m pretty sure she asked ‘who in the name of Baby Jesus is this crazy-looking man?’ 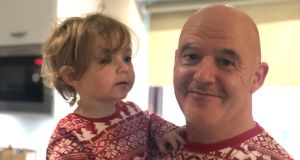 All dressed up: Conor Pope with his daughter Ruby

I started to wonder if I’d stumbled into the Longford version of The Truman Show when three baby deer and one red squirrel scrambled, with uncannily good timing, through the woodland right in front of five festive Popes as we followed a trail through a twinkling forest on the way to meet Santa.

The scene was so perfectly Christmassy that I found myself peering into the darkness to see if Center Parcs staff had been stationed in the woodland to whoosh ridiculously cute wildlife into the path of guests at exactly the right moments.

But I could see nothing, save for the tail ends of the fawns and the endless strings of fairy lights that some poor souls must have spent days wrapping round trees to make the Center Parcs Winter Wonderland sparkle.

The elf asked if we had any allergies. We said no and she giggled delightedly and said we’d be able to enjoy all the chocolatey treats waiting for us

The sparkle worked wonderfully. Even though it was only early November and Mr Big had barely settled into his midlands grotto, it was beginning to look a lot like Christmas. As we neared Santa’s home away from home, a flurry of artificial snow started to swirl around us. Then three enormous reindeer began bobbing their heads before bursting into full throated song – imagine that Billy Bass singing fish thing that was all the rage a few Christmases back, only bigger. They were absolutely terrifying.

The road to Santa was peppered with other magical and mental moments. There were more trees and fences bedecked with fairy lights and wooden elves in ornate workshops and sleighs and jingling bells lit up like – well, Christmas trees. It was also absolutely Baltic, which gave the place a pleasingly North Pole-ish air.

After following the elaborate and vaguely hallucinogenic trail, humming festive tunes left in our heads by the singing reindeer, we arrived at the door of a brightly lit log cabin and were greeted by an elf. With little or no introduction, she asked if we had any allergies. We said no and she giggled delightedly and said we’d be able to enjoy all the chocolatey treats waiting for us.

The door was flung open and there was Santa, ho ho hoing with gusto. The instant the littlest Pope clapped eyes on him, she started howling and clinging desperately to her mammy

Then we found ourselves in a holding pen, where a giant owl unexpectedly sprang to life and started speaking in a deep voice and nodding his head in a mechanically terrifying fashion. Whatever he was saying was drowned out by the screams of my not-yet-two-year-old daughter.

We moved quickly away from the manic owl and rounded a corner into another room where Christmas appeared to have thrown up. There were gifts and decorations everywhere, and TVs played rotating clips of elves getting Santa ready, and presents being wrapped and sent on their merry sleigh.

The littlest Pope stared suspiciously around her, while the soon-to-be teenage Pope shuffled awkwardly, cringing at the indignity of it all but keeping a brave face for the sake of her younger sisters.

Any doubts I had that she might still somehow be safely enveloped by the greatest and most magical Christmas mystery of them all were immediately dispelled. That’s always going to be a sad moment in the life of a father, and it is a sadness that is only ever going to be marginally lessened by its inevitability.

In the best Taylor Swift style, I shook it off and we ploughed on and turned a corner to be greeted by another elf.

“Where are you from?” I asked, with all the enthusiasm you might expect from a middle-aged man wearing a Buddy the Elf jumper, one who is just coming to terms with relentless march of time.

“Oh, from just up the road,” this elf replied.

“Not the North Pole then,” I said, slightly deflated.

Then suddenly the door was flung open and there was Santa, ho ho hoing with gusto.

The instant the littlest Pope clapped eyes on him, she started howling and clinging desperately to her mammy.

My babytalk isn’t yet fluent, but I was pretty sure she was saying “Who in the name of the little baby Jesus is the crazy-looking man with the huge white beard and the very tight red jim-jams?”

Poor Santa. He looked brilliant and sounded great and did his best in trying circumstances. He gamely asked the soon-to-be-teenage Pope what she wanted from Santa. She mumbled something about a surprise when I suspect what she wanted more than anything else in the entire world was to leave the grotto with whatever shreds of her soon-to-be teenage dignity she had left intact.

Her slightly younger sister – who, I think is on the cusp but hopefully still in the magical mystery camp – said she had yet to decide what she wanted from Santa. The Late Late Toy Show had not aired yet, in fairness to her.

The littlest Pope’s wails grew louder and easier to understand. “Get me the hell out of here,” she may as well have said.

Three photographs were taken in rapid succession, presents were grabbed from poor Santa’s hands – or maybe it was an elf, things were blurry at this point – and we fled to the Christmas shop and the picture collection point.

As the pictures emerged from the printer, the elf behind the counter tutted sympathetically at the sight of so few smiles and so many tears.

We left wondering where all the promised chocolatey treats had gone.

Minutes later we found ourselves in swimsuits in a subtropical swimming paradise, barrelling into the backs of strangers in the wild water rapids as a heavy November rain started to fall over the midlands.

The trauma began to ease, and I could almost feel the visit making its way into my long-term memory, where it will sit happily waiting to be recalled at future moments when I need to smile.

Santa at Powerscourt
Powerscourt House, Enniskerry, Co Wicklow; until December 23rd; €15 per child; powerscourt.com
Having worked up close and personal with Santa in his grotto at the Avoca in Powerscourt for a piece I wrote years back, I feel like I know more about this place than most. It is excellent. The grotto is gorgeously decked out, the elves are attentive, and the Santa is full of chat. It has the added bonus of being in an Avoca so you can pick up all sorts of fancy (and pricey) decorations and food once the visit is done.

Rathwood Santa Train
Rathwood, Tullow, Co Carlow; until Christmas Eve; children €16-€21, adults €11-€14; santatrain.ie
Not only do you get to visit Santa at this most sought-after location, you are brought to see him on a happy train lit up like a Christmas tree. The waiting is made fun through the intervention of elves, who play all sorts of games with the kids. The grotto is magical, and there is a lovely shop to visit afterwards. There is also the excitement building as you arrive and the post-visit excitement on the drive home. Is it any wonder the visits can book out almost as soon as they go on sale?

The Santa Experience
Jetland Shopping Centre, Limerick; Dunnes Stores, Kilnamanagh Shopping Centre, Dublin 24; and Dunnes Stores, Patrick Street, Cork; until December 23rd; children €12, adults €6; santaexperience.ie
What you are promised here is an “interactive multi-family tour through the North Pole ending in Santa’s magical house”. The tours have a maximum of six children, so Santa gets to “speak to each child individually”. To be honest, that’s the least we’d expect. There is also a visit to the elves’ post office, Santa’s reindeer stable and a sleigh station.

Santa Experience at Croke Park
Croke Park, Dublin 3; until December 23rd; two- to 12-year-olds €16, toddlers aged 13-23 months €8, adults €10; crokepark.ie/santa
This Santa has adopted GAA HQ as his base “before starting preparations for the big ‘final’ on Christmas Eve”. Every helper is a member of the North Pole GAA Club, “the most northerly and magical GAA club in the world”. The visit includes a visit to the GAA Museum and an elf dressing room “where you can see the elf stars tog out in their Christmas training gear. You will then sneak pitchside to the sound of cheering crowds for a Croke Park ‘Elfie’ opportunity”. Visitors can also test their own hurling, camogie and football skills, before they get to see Santa.

Fota Wonder Christmas Experience
Fota Island Resort, Co Cork; until December 23rd; children €16-€28, adults €11-€18; fotawonder.ie
This Santa is wildly popular in Cork, so much so that in October, when locals thought they had found a code that would get them into the grotto for half-price, 1,200 tickets were sold in less than 12 hours. The ho ho hos turned into no no nos when the Fota folk realised the error – caused by a computer glitch – and said people would have to pay full price. It was unfortunate for all concerned, not least Santa and his elves, who, by all accounts, do a great job.