‘You’re a camel hair coat away from being your grandfather, Ro’ 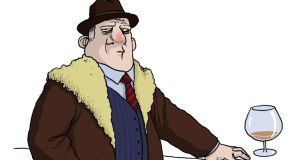 I’m looking at Ronan and the old man. It’s difficult to tell the two of them aport. A gangster and a gangster in the making

The old man stares at me down the length of a Montecristo Churchill Anejado and goes, “Aren’t you going to invite me in, Kicker?”

“I thought you and I should possibly have a conversation, Ross, about what happened at Leopardstown on Stephen Zuzz Day.”

Ro steps past me as well and I give him a filthy. I’m like, 'I’m disappointed in you, Ro.' He’s there, 'You’re some bleaten flute, Rosser.'

“It’s obvious what happened at Leopardstown on Stephen Zuzz Day. You paid Ronan to throw the race.”

I spot my son, standing just behind him, staring at me down the length of a John Player Blue.

I’m like, “Look at you. Two focking crooks. You’re a camel hair coat away from being your grandfather, Ro, and that’s not meant to be a compliment.”

Ronan just goes, “You were bang-on what you said, Cheerlie, about intelligence sometimes skipping a generdation.”

Which is a definite dig at me I’m pretty sure anyway.

“Come on,” the old man goes, “let us in, Kicker, and we’ll explain everything to you in plain and simple terms!”

I’m there, “Just so you know, the goys are all here as well – we’re actually having a syndicate meeting tonight.”

“All the better,” the old man goes, stepping past me. “I can explain it to the chaps myself.”

Ro steps past me as well and I give him a filthy. I’m like, “I’m disappointed in you, Ro.”

Down in the kitchen, Fionn, Christian, JP and Oisinn are discussing how much actual meat there is in a horse – because Oisinn has had a firm expression of interest from a goy who runs a kebab shop in Dún Laoghaire called Shish Got Real.

Yeah, no, we’re about eight cans each into this syndicate meeting.

The old man decides to just brazen it out. He’s been cross-examined by some of the shorpest legal minds in the country and it’s a tactic that has always worked for him – aport from the time when he was jailed for three years for paying and soliciting bribes to corrupt the planning process.

He goes, “Hello, chaps! Ronan and I just wanted to clear up any misunderstanding vis-à-vis – if you’ll pordon the French – the events that happened in the Corncrake Hurdle on St Stephen Zuzz Day.”

“There’s no misunderstanding,” Fionn goes. “Ronan held Hoss O’Carroll-Kelly up when he was 10 lengths clear – just like he threw himself off of the horse when he was leading at Punchestown. Is that what happened, Ronan?”

Ro just nods – not a flicker of shame or embarrassment. The southside gene is strong in him.

I’m there, “So you’re actually admitting it? Do you have any idea how hord it was for us to watch all those Rock goys celebrating and sending us over bottles Veuve Clicquot in a definitely passive-aggressive way?”

The old man’s there, “Ross, let me tell something – there’s far more to life than just perennially playing out some silly old school rivalry.”

“Okay,” I go, “I’ve either had too much to drink or not enough. Did you really just say what I think you said?”

Christian goes, “What else is there, Chorles? I think we’d all be interested to know.”

Just because you pay for something doesn’t mean you own it. You of all people should know that – as a former resident of 7 North Circular Road, Dublin focking 7.

The old man’s there, “Money, Christian. Making it. Lots and lots of the stuff.”

I’m like, “That’s not the reason we bought the horse.”

The old man’s there, “You didn’t buy the horse, Ross.”

“Well, I paid for it, if I remember correctly. Fifty thousand euros, wasn’t it?”

“Yeah, no, we were all going to pay you back when he storted winning actual races.”

“I also paid the trainer and the veterinary bills.”

“Just because you pay for something doesn’t mean you own it. You of all people should know that – as a former resident of 7 North Circular Road, Dublin focking 7.”

Something suddenly occurs to Fionn. See, he’s the brains of the operation, which, being honest, isn’t much of a claim to fame – a 60 watt bulb in a room full of 40s. He goes, “We bought the thing from a goy called Hugo McAllister. None of us had seen him since we left Castlerock. Then he turned up in The Bridge one day and asked us if we wanted to buy a racehorse. I’m presuming now that that wasn’t the random encounter we thought it was?”

The old man goes, “I might have known you’d figure it out, Fionn. Yes, I wanted to buy the horse because I knew he was good. Unfortunately, as Ross has just intimated, Charles O’Carroll-Kelly is not a name that everyone associates with honesty and trustworthiness. Which was why I didn’t want to be registered as the actual owner of the horse. But I knew that if Hugo offered it to Ross – while playing up the whole Blackrock College rivalry thing – then he wouldn’t be able to resist it.”

Oisinn goes, “I don’t understand, Chorles – if the horse is as good as you say it is, why does Ronan keep throwing races.”

“Because we’re building up a losing record for him.”

“You’re not wrong there,” I go. “So far I’ve lost my children’s college fund. I’m just praying that they turn out to be as thick as me and a third-level education never comes up in conversation.”

Ronan’s there, “You’ll get yisser muddy back, Rosser – with inthordest.”

He goes, “Do you not wonderstand what your aul fedda’s saying to you, Rosser? We’re building up a losing streak for the horse so we can lengthen the odds.”

I’m looking at him and the old man. And, aside from their choice of smoke (cigor versus cigarette) and footwear (John Lobbs versus Nike Air Maxes), it’s difficult to tell the two of them aport. A gangster and a gangster in the making. I knew it was a mistake to let Ronan go and work for Hennessy Coghlan-O’Hara.

The old man has a long suck on his Montecristo, exhales slowly, then goes, “Cheltenham, my dear boy!”

What ever happend to Choupette, Karl Lagerfeld’s pampered cat