The unfairness of sharing a birthday month with Jesus Christ

Just like Carols Vorderman and Smillie, I am literally a Christmas Carol 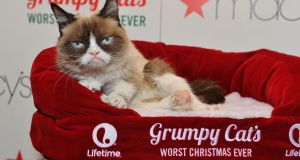 A December birthday would give anyone a case of the bah humbugs Photograph: Getty

My commiserations to all of you with December birthdays. I suffer along with you. Being annually upstaged by the baby Jesus is bad enough, but inflicting the same curse of a December birthday on my own daughter may well be cause for legal action – or at the very least, a course of intensive counselling. Mea culpa, darling daughter. I trust that you will break the curse.

To explain: I am a literal Christmas Carol, albeit an early one. My mother had always wanted her first daughter to be called Gillian, but when she was told her due date for me was to be December 24th, she decided she couldn’t rob me of my predestined name of Carol.

Originally carols (meaning a dance or song of joy) were sung to celebrate all the seasons, but the tradition of singing them at the winter solstice or Christmas is the only one to survive through the centuries. And so Gillian was ditched until the next daughter arrived. (Otherwise I would have been called Pamela, my sister Gillian told me while discussing this article. And even though she was born on Palm Sunday, my mother wasn’t going to be done out of her favourite name again and Gillian was saved the indignity of being named after a religious festival.)

Even in the womb, however, I was a disobedient child and my mother went into early labour a few weeks before her due date. She was rushed to hospital, whereupon her contractions stopped and she assured the medical staff that it was all grand – she could go back home again and get on with making the Christmas puddings as it was a false alarm.

The hospital staff were having none of it and I was prematurely induced out, kicking and screaming. According to my mother, the inducement was to avoid a Christmas Day admission but I suspect a diagnosis of pre-eclampsia (then called toxaemia) may have had more to do with it than a desire to clear the wards of pregnant women during the festive period.

And so, just like Carols Vorderman and Smillie, I joined the ranks of literal Christmas Carols – the people who have to compete with the baby Jesus for attention during the month of our birth. Thus began years of getting one “big” present instead of two, having “joint” birthday and Christmas celebrations, getting my birthday present wrapped in Christmas wrapping paper and having feck-all celebrations to look forward to during the rest of the year.

As birthdays are essentially an exercise in benevolent narcissism this didn’t sit well with me at all. In fact, it led to a Grinchlike attitude to Christmas and all the seasonal celebrations. The cheek of you all – putting the birth of Christ before moi! Where are your priorities? However, the upside is that I can basically use my birthday as an excuse to stay drunk for the entire month of December (I’m joking of course, but not as much as I should be).

You’d think that, knowing the pitfalls of a December birthday, I’d made damn sure not to inflict such misery on any other member of my family, wouldn’t you? And yet some three decades later my own beautiful first-born arrived early in December.

Granny warned me I would have an early child, and she was right – I was rushed to hospital a month before my due date

“What is it about March and April?” she recently wailed to me, wanting to know why rational adults insist on unprotected sex at a time when they are well aware of the possible disastrous outcome. Her father also has a December birthday, as do his two sisters. By the time Christmas Day comes round in our house we are too knackered, emotional and broke to do anything but argue and sleep. Hence my Grinchness.

In my defence, I told her that my dad died on the night she was conceived and her due date was exactly nine months after that day, January 9th. (Yes, Freud was right, Thanos and Eros really is a thing).

She was not supposed to be a December baby. But my granny warned me that I would have an early child, and she was right – I was rushed to hospital a month before my due date. In contrast to my mother’s experience, when I arrived panting my consultant told me that I was suffering from just about everything except early labour – food poisoning, stomach cramps, a flu bug, urinary incontinence (when my waters broke) – until my daughter’s head had practically appeared. By then it was too late for an epidural.

That one sentence is less than 10 words and yet I know many mothers will share my horror at it. On my next pregnancy I refused to go to the hospital until I knew that an anaesthesiologist was standing outside with all the apparatus waiting for me.

But oh, how we laughed when the nurses cooed over my first-born’s little head the following morning telling her, “some Christmas tummy bug you turned out to be”. I decided to be philosophical about the whole experience and named her Sophie, not Noelle or Holly or Ivy or any other appropriately seasonal name. And I hoped she would forgive me for the faux pas of giving birth to her in December.

Of course, winter has always been a time of festivity and celebration in Europe. Cattle had been slaughtered so there was fresh meat available and wine and beer was fermented and ready for drinking.

The Roman festival of Saturnalia in late December was particularly popular as was the celebration of Mithras on December 25th. In the later Roman period, AD 270, before there was any mention of a Christmas festival, Emperor Aurelian announced December 25th as the official day of worship to the sun god Sol Invictus.

It wasn’t until the fourth century AD that the Catholic Church decided it needed to give its God a birthday, and what better day to celebrate it than December 25th – despite the fact that shepherds were hardly out on the hills in below-freezing temperatures, nor would a Roman census have been called during that month. Facts, schmacts. People were used to festivities in December. Baby Jesus? Sol Invictus? Mithras? Just pour the wine, carve the celebratory joint of meat and get that carol singing started!

So, if it was okay for the early church to pick a date of its choice for the birth of Christ I would like to argue that we beleaguered December babies should also be allowed to choose our own birthday. Preferably one in July or August. When we can have barbecues and summer cocktails and get presents that are not wrapped in Christmas paper. You can all take this as an official declaration that I am now changing my birthday to August 3rd and there will be a big party to celebrate this. You are all invited. Bring presents. And beer.

And, yes, you can sing carols – just not Christmas ones.