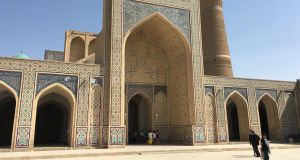 The scale of the Po-i Kalan Islamic complex of 16th century buildings in Bukhara brought Shilpa Ganatra to tears.

Uzbekistan is ridiculously good-looking. Somewhere within the Nuratau Mountains, as jittery birds chirp in the trees and a stream babbles in the background, I’m sitting barefoot and cross-legged at a colourful dastarkhan - the Uzbek low table on which the remnants of meats, salads and bread remain after a feast of a lunch. The well-watered trees and foliage are strong shades of green, and the sky is a primary blue. The kindly owner Gulmurod Zarifullaev pours tea - an absolute staple here - from traditional hand-painted china. I have to stop and breathe it all in; this whole scene is just impossibly pretty.

The other residents of Rakhima Guesthouse are a Dutch couple, lounging elsewhere in the sun-mottled courtyard. We greet each other apprehensively; we thought we had uncovered this rural find and had it all to ourselves, but no - the remote village of Sentob is growing in reputation thanks to local sights like the petroglyphs, reportedly more than 2,000 years old and found at the bottom of a mountain, and its water spring that’s said to be holy.

Later, we hike upwards to find an abandoned cluster of crumbling buildings and a fortress dating back centuries, all roofless and ruined. A shepherd has built a home next to them, ignoring the eeriness of the scene. From this vantage point, it’s the only sign of human civilisation seen within the rocky mountainscape, and it’s this image that sticks with me long after I return home.

Yet, only a small percentage of visitors veer from Bukhara, Samarkand and Tashkent: the trio of Silk Road cities that were made magnificent during its heyday of the 16th century, as traders bought, transported, then sold luxury goods like silk, spices and gold between Venice to the west and Beijing to the east. These three cities soak up most of Uzbekistan’s seven million visitors, and it’s only partly because of Joanna Lumley’s TV series on the Silk Road.

Today, Tashkent has all the drive of a modern capital. Its buildings, most of which were built after the devastating 1966 earthquake, are nondescript, but compensated for by spacious roadside greenery and herbaceous borders. The metro, too, is appealing. The more creative side of the Soviet Union’s occupation is seen in each uniquely-themed stop that’s been maintained since Uzbekistan became independent again in 1991. Feeding in a 10c token, I hop on and off all afternoon, like an artistic treasure hunt.

Samarkand, which dates back to seventh century BC, is arguably the heart of the silk road, brimful of marvellous mosques and intricate buildings, a concentration of which are found in the regal complex of Registan, and the blue and turquoise-filled Shah-i-Zinda necropolis.

Bukhara, too, is everything you’d associate with unqiue Uzbekistan: the Islamic heritage collides with Soviet occupation in what was clearly an affluent trading post. The old town is crammed with architecture so beautiful I was brought to tears twice: once at the last emir’s summer palace Sitorai Mohi Hosa, as it was just so exquisitely decorated, the second at the Po-i Kalan complex of 16th century buildings, for the sheer scale of it all.

These and other sites are Unesco-protected, which only adds to its popularity. In the central plaza of Lyabi-Hauz, between the fine examples of mosques, and the multitude of hotel signs and dome-topped bazaars, the call of “Scarves! Jackets! Jewellery! Almost free!” stands out, as stall holders show off their souvenirs and embroidery to swarms of potential buyers.

Visa restrictions for European countries relaxed only seven months ago - Irish passport holders can now enter hassle-free - and it has not reached the multi-sensory clamour of Istanbul or Marrakech, but I hadn’t expected this area to be so dominated by tourists just yet.

Off the beaten path

Rural Uzbekistan is an antidote. In a country as large as Spain, there’s no shortage of places off the beaten path, to experience Uzbekistan’s beauty in all its authenticity. To the west are remote desertscapes (the Soviet-led practice of growing cotton in Uzbekistan, to the detriment of water supplies, have only added to this). To the east, the Fergana Valley is famous for traditional craft. Just as stories of our past are woven into song and poem, here, stories are literally woven into the carpets and wall embroidery, with each symbol and design carrying hidden meanings. The bird is a symbol of peace, the pomegranate means fertility, and almonds signify protection.

My own detour is the easiest of the lot: stepping off Uzbekistan’s bullet train a stop before Bukhara, I’m in the central region of Navoi (sometimes written as Navoiy - English spellings are yet to settle), named after Alisher Navoi(y), the Shakespeare of Uzbekistan. Tashkent houses a colossal library named after him, and there’s a metro stop dedicated to him, but the larger honour is with this deserty region, with its rustic feel, creased mountains and warm, hospitable people.

Given the proportion of desert, experiencing Navoi properly should involve a few desert activities. So after a long drive - a necessary evil in these parts - I try out camel riding. Four word review: inelegant start and finish.

Later, I spend the night at Safari Yurt Camp for a taste of how Kazakh nomads lived, but with an added driver, western-style toilet block, clean sheets and three-course meals. Aided by those comforts, it’s hard not to be enchanted immediately. Stepping out of the car, I see the Milky Way in the sky with my naked eye, and in the distance, the rest of the guests are circled around a fire as a sole folk singer and his guitar soundtracks the night, giving me a whole new genre of music to investigate on my return.

Near the main town of Nurata is Chashmar Spring, a pilgrimage site based around a natural spring that teems with trout feeding off its minerals. “The spring was formed when the first imam Hazrat Ali came to preach Islam,” explains Said Fayzulloh, a local archaeologist, as he shows my group around the complex. “He struck his staff on the ground, and up gushed a spring in this desert. Today, 430 litres spring up every second.”

Later, as Said cycles off on his restored 1970s Russian bike, I climb up the hill at the complex’s edge just as the later afternoon sun turns wheaty-yellow. Aside for a peddler selling pretty jewellery, there’s not a soul to be seen. A short, steep climb later, I’m at the best viewing spot in town, surveying the flat urban area to one side, and the Nuratau Mountains on the other.

Just as the golden hour turns 24-carat, I reach the ruins of a fortress, believed to have been made by Alexander the Great, who spent two years conquering the area. His work is also seen in the nearby water tunnels: an underground system used to bring the precious commodity from the mountains to the town. It’s keeping with the tone of Uzbekistan that it’s unassuming and unmarked, beyond a rustic farmhouse where an old woman, hair bound rightly in cloth, sits on a stool and pulls on the udders of an obliging cow.

She finds it thoroughly amusing when I approach in fascination. After declining a go at the udders and, more sadly, declining her invitation for dinner, her husband brings out a bowl of katik, Uzbek-style natural yoghurt, so I can sample the end result.

It’s typical that this vignette of daily life takes place with that the backdrop is golden-yellow mountains as far as the eye can see. Every stop during my visit uncovers a remarkable sight, whether it’s the unspoilt beauty of Aydar Lake, an imposing, centuries-old mosque with incredible decoration, or giggling kids racing in a cart across a busy food market. Central Asia is returning as a hotspot for travellers because of the centuries of globally-important history and culture within it. But even on a superficial level, it’s truly sensational.

The landlocked country of Uzbekistan is located in Central Asia, bordering five other ‘stan’ countries. It’s relatively safe - women are well able to walk around at night on their own, for example. It uses the Som, and €1 is 10,000 SOM - so double check the zeros when paying. No visa is needed for EU nationals.

Uzbekistan Airways flies direct from London Heathrow to Tashkent on Tuesdays and Fridays, from €480 return.

Travel the Unknown offers both group and bespoke tours. As a guide price, the 14-day Uzbekistan Odyssey, which includes part of Navoi, starts from £2,495pp (€2,800). traveltheunknown.com