Cider roast turkey has an apple-infused succulence, with Spanish-inspired stuffing and a Brussels sprout gratin 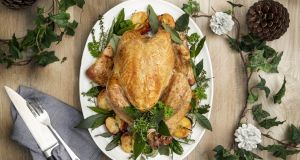 We occasionally wonder what Christmas would be like if we didn’t have it at home. There are many fine hotels offering packages that would pamper us into bigger pants within hours of arriving.

It’s always a hectic time for us. The restaurant is heaving on Christmas Eve and somehow we have to get things ready at home for our own family too. We always manage it though. I go home and set things up.

But when it comes to it, we couldn’t move from the house, we love Christmas at home too much. There’s usually 12 of us, including the cousins from Zurich. They are as close as brothers and sisters. The house trembles with excitement and anticipation. There are lots of presents, despite the sensible Kris Kindle.

There’s very little sleep it seems over those few days. Christmas morning bustles while it’s still dark outside. “They’re up already,” we groan. But we are excited for them too, so we haul ourselves out of bed. Did Santa eat his biscuits? Did Rudolph eat his carrot? Then it’s time for a simple lazy breakfast . There is no order – just teenagers lounging around the house in their Christmas pjs.

The turkey will be in by then. (I’m allowing 35 minutes per kilo for a room-temperature bird). The ham will have been done the day before. I’ll be busy cooking, but I will have help, plus I always get a few sneaky jobs done in the restaurant in the preceding days.

I’ve written before about my turkey phobia. I am not a lover of the bird, but I always succumb as it’s the rule of the majority. So if I have to have it, I like to take a little break with tradition.

This is my favourite stuffing, I’ve been making it for years to stuff inside many a different bird. It has a Spanish accent and the flavours combine to lift even the most pedestrian of turkeys. I’m cooking the bird with cider. It imbues an appley moistness into the meat and goes wonderfully well with the stuffing. I strain the juice to form the basis of the gravy. It isn’t brown, but I’m not one bit worried.

Sprouts are heaven, I even eat them cold, like stinky little gobstoppers, much to my wife’s delight. This gratin is different, all crunchy and lovely. You can prepare it in advance, with the breadcrumbs on top, and finish the baking when you are ready to eat.

I hope these recipes help. Don’t get too stressed. The cook should be the first on the couch with a little glass of something. Then have the inevitable snooze, knowing that the leftovers will do tomorrow.

Method
1 Pre-heat an oven to 170 degrees Celsius, or equivalent.

2 Remove the neck and giblets from inside the turkey.

3 Trim any excess fat from the opening and stuff the turkey, taking care not to pack it too tightly.

4 Place the onions and smoked bacon lardons on the base of an oven tray, along with the turkey neck, cinnamon and herbs.

5 Perch the turkey on the onions and pour one can of cider around the tray.

6 Brush the turkey liberally with the butter, then season it well.

7 Cover tightly with foil and seal around the edges of the tray.

8 Cook for 2 hours 45 minutes, then remove the turkey from the oven.

10 Remove the foil and add the other can of cider and place in the oven for another half hour.

11 Baste the turkey with the buttery juices in the tray a few times in this last phase as it will give a lovely golden sheen to the bird.

12 When cooked, transfer the turkey to another tray, cover it loosely in foil and allow it to rest.

13 Strain the juices into a pot. Let it settle. Any fat will rise to the top. Ladle this off.

14 Reduce the juice (by bringing to the boil) by one third. This is your gravy.

2 Add the onions to the butter and cook slowly for 20 minutes until the onions are soft and translucent.

3 Add the chorizo and cook for a further five minutes, until the oil runs free.

5 Season with salt and pepper.

1 Preheat an oven to 170 degrees Celsius, or equivalent.

2 Sauté the bacon in a little of the duck fat until it is golden.

3 Transfer the bacon to a shallow casserole along with the sprouts, remaining duck fat, sugar and a little salt.

4 Pour the cream and water over the top. Mix well.

5 Bake in the oven for 15-20 minutes until the sprouts are just tender.

6 Mix the breadcrumbs with the lemon zest, melted butter, sage, and Gruyère cheese. Season with salt and pepper and sprinkle over top of sprouts.

How do you get bereaved fathers to talk? Bring a football
9