Betty Hart obituary: A ‘ball of energy’ who regularly walked, cycled and swam at the local leisure centre

Lives lost to Covid-19: ‘She always said her 60s were the best decade of her life’ 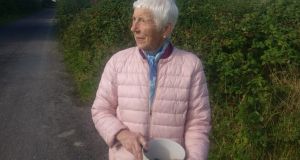 Betty Hart: Every autumn she was out picking blackberries, and there were many, many local recipients of her pots of blackberry jam over the years.

She was christened Kathleen Elizabeth Ryan on June 19th, 1931, in Cobh, Co Cork, but was always known as Betty. The family moved to Clonakilty when she was 11, and that’s where she spent the rest of her life.

She married Patrick Hart in 1955, and had to give up her job in the Department of Agriculture, due to the Marriage Bar. They had seven children and 20 grandchildren. On the death of her grandmother, her father inherited a grocery shop in the town, and Hart took over the running of it. Her youngest child was then a year old.

“She ran it until 1989, and then we changed it to a wool shop,” her daughter, Maria Hennessy says. Mother and daughter ran Hart’s Wool Shop together for several years. “She was a superb knitter. Even to the day she died, she was wearing the Fair Isle hats she made herself.”

A “ball of energy”, she regularly walked, cycled, and was still swimming at the local leisure centre until last year. She also loved set dancing, going to sessions two or three times a week. Every autumn she was out picking blackberries, and there were many, many local recipients of her pots of blackberry jam over the years.

Before the death of her husband in 2006, the two of them made many trips abroad in their car. Her task, pre-Google Maps and sat navs, was as navigator, and she always had her research done and her lists of towns all made out before they set off. They drove to France, Germany, Switzerland, England and Scotland. On Sundays, they drove all over the back roads of west Cork, just “to see what was happening”.

“She always said her 60s were the best decade of her life. She loved good fun, and talking to people. She knew everyone from being in the shop, and everyone knew her. She’d say to people, ‘You’re looking lovely today’.” She loved clothes, and she was always admiring people and their style.

The wool shop closed when she was approaching 70, and had decided to retire. Another daughter, Aileen, then took over the premises as a coffee shop. “She used to call to the coffee shop every single morning for coffee and scones; she was an institution in Clonakilty.”

Her daughter Maria describes her as “resilient”; a resilience that became even more pronounced when Hart was diagnosed with dementia six years ago. She lost her ability to speak, but not to communicate. “She’d tear the labels off jars and packets and bring them into the shop to show the shopkeeper what she wanted to buy.” Betty Hart may not have been able to chat any more, but the local community continued to support her.

She went into Clonakility Community Hospital in January of this year. She tested positive for Covid-19 on April 11th, and died there on April 21st. She was 88.